It was a very powerful end to a very benign week. The major market indices were up over 2% on the day but flat on the week. 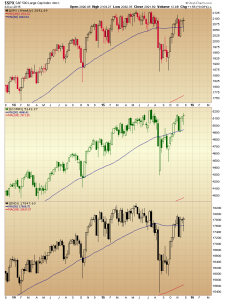 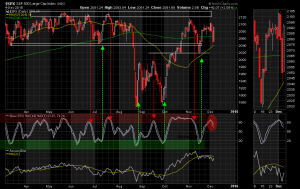 Focusing on the S&P 500 chart, the strength in the index on Friday created a large white candle just below its old highs. Those old highs mark the top end on a channel that it traded in from April to August, and old highs do have a psychologically magnetic property. On the other hand, there was a bearish crossover on the stochastic oscillator and it moved out of an overbought condition. These crossovers have been reliable signals of shifts in the short term trend, and, additionally, the accumulation/distribution line crossed below its 21 period signal average.