This chart takes a look at the S&P 500 and the graph of the number of stocks in the index above their 200 day moving average in late 2011 compared to today.
In 2011 the index dropped sharply in August bottomed out in September and struggled into the end of the year to make new highs. That pattern seems to be playing out again on the S&P chart over the last three months. At one point in 2011 only 10% of the stocks in the S&P 500 were above their 200 day average, but what followed was a two-staged recovery process that eventually saw the ratios moderate. The number of stocks below their 200 day moving average has been in bearish divergence to the index this year, but again that constructive double tiered action has been playing out over the last three months.
History doesn’t always repeat and it probably won’t this time, but it would be nice if it rhymed. 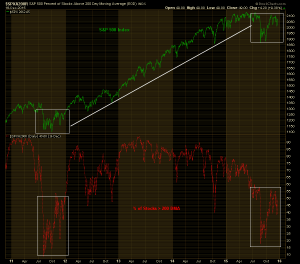