These levels of support and resistance are already embedded in most traders brains, so I’ll keep it brief:

The S&P 500 index breached a long term uptrend line in August and has been unable to return to trend and make new highs. It was confined to a channel range between the 2130 and 1900 levels for the year. Its long term health is dependent on its ability to hold the August and September lows, and ultimately take out the 2015 high and return to trend. 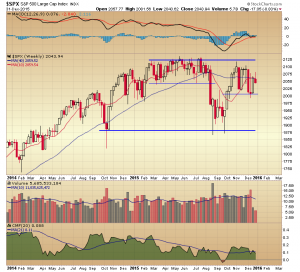 The index has been consolidating in a narrow range at the top end of the long term channel since the October bounce, which took it briefly back up to the area of the highs made earlier in the year. On closer examination, however, this consolidation looks like a declining channel, and one key technical indication suggests the short term trend is lower. 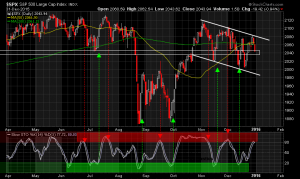 I have been highlighting for some time the stochastic oscillator on the daily timeframe and its accuracy in identifying short term shifts in price momentum. Crossovers in overbought or oversold zones and then moves out of those zones have signaled short term reversals. The oscillator has made another bearish crossover and is moving out of an overbought condition. The assumption is that the index will retest the channel low.

These are the key levels of support and resistance, as I see them, going into the new year: