The recent retest of the support line of the declining channel on the S&P 500 chart needed to hold long enough for the stochastic oscillator to readjust and turn upward, in order to duplicate the bullish reversal signals it has been sending in the past. But the retest failed dramatically, taking the index back down through the support line of the channel pattern and further suppressing the stochastic oscillator. 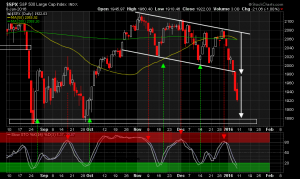 The oscillator is clearly oversold and, as I have been highlighting for some time – when the oscillator makes a crossover in an overbought or oversold zone and then moves out of that zone, it has signaled short term reversals. That said, the stochastic oscillator is a bounded oscillator and can stay in an extreme condition for an extended period of time. 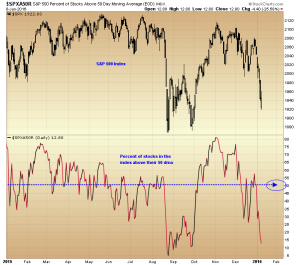 One other indication that the S&P 500 is oversold and due for a bounce is the number of stocks that are above their 50 day moving average. The chart shows that only 13% of the stocks in the index are above that average, which is back down to last year’s September/October readings.

At this point, patience is required along with a bullish stochastic signal and an identifiable candle reversal pattern.