The stochastic oscillator on the daily S&P chart made a bullish crossover last week and added to that momentum in this shortened trading week. The key 1875 resistance level was broken and the index had two strong sessions with only a modest pullback at end the week. 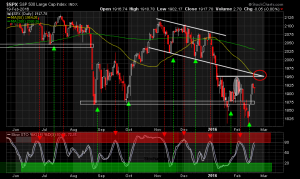 The next level of resistance is the intersection of the extended former support line of the October through December declining channel, the 50 day moving average, and the horizontal resistance line drawn off the January and February highs. These lines are currently converging in the 1950 area, and a break above that level will also be a new short term swing high.
The stochastic oscillator, in tandem with identifying candle signals, has been spot on in highlighting short term shifts in market direction, and we’ll continue to be alert to them.