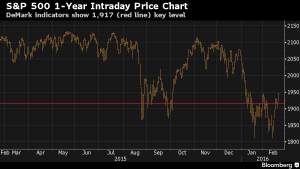 The conditions have been met for famed market technician Tom DeMark’s dire market prediction to unfold. From an article on Bloomberg yesterday:

“The Standard & Poor’s 500 Index’s rally will give way to a full-blown retreat should the benchmark gauge lose altitude over the next few days, according to Tom DeMark, the chart analyst who predicted an advance in oil earlier this month.
A momentum formula employed by the DeMark Analytics LLC founder that compares closing prices with levels four days earlier would issue a bearish signal should the advance fizzle this week, he said. Specifically, it would foreshadow a decline should the S&P 500, which ended at 1,945.5 Monday, slip at Tuesday’s open and close below 1,926.82. Those conditions were met today.
The benchmark index slid 0.2 percent at the open and declined 1.3 percent to 1,921.27 at 4 p.m. in New York.”

“Now that this S&P 500 trigger has occurred, the benchmark index will decline at least 8.2 percent from Monday’s close to 1,786, a level last seen in February 2014, according to DeMark. Should the market top correspond with what he referred to as “bad news,” the S&P 500 could see deeper selling down to 1,736, an 11 percent decline. DeMark sees the ongoing market rally as temporary relief as investors exit short positions.”