The stock formed a bullish morningstar reversal pattern at the end of January, and has since been attempting to hold above the 50% retracement level of its 2013 low and its 2015 triple top. 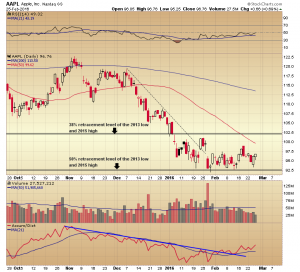 In the flat period that followed the relative strength index, a measure of the ratio of the average gain and average loss over a 14 day look back period, has been in bullish divergence, and reflects an underlying improvement in price momentum. Volume has been declining this month, as would be expected during a period of consolidation, but the accumulation/distribution line is back above its 21 period signal average and a three month downtrend line. The bottom line is the stock has continued to hold support even after as Jim Cramer noted on Wednesday, having everything but the “kitchen sink” thrown at it, and the technical indicators suggest that at some point soon, it should begin to move higher.