A morningstar pattern formed on the weekly S&P 500 chart similar to the one that formed in October 2014 at about the same level on the index. It reflects a transition from bearishness to bullishness and is considered a reliable reversal pattern, more significant in this case by its appearance at prior support.The doji of this three period candle series had a long tail, like the tails that marked important lows in 2014 and 2015. 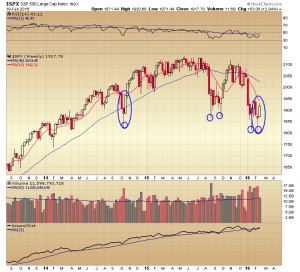 This market has a lot of work to do to repair recent technical damage but this morningstar could be the start of that process.

The FANG stocks were hit particularly hard today relative to the modest weakness in the technology sector and the broader market. A series of bearish candles formed on the daily charts, which suggest that this weakness in the incisor acronym basket was more than a one day event and could be signaling a short term reversal. 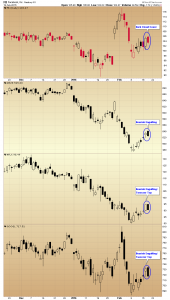 A dark cloud cover candle formed on the Facebook chart and bearish engulfing candles formed on the Amazon, Netflix and Google charts. In each case there was a higher open which marked the high of the day, and a deep decline and a close near the lows of the day. These types of candles, of course, require confirmation but they seldom reverse back to trend as quickly as they form.

A link to my analysis of the Chevron (CVX) chart published on TheStreet.com this morning.

Here’s a link to my analysis of Chipotle Mexican Grill (CMG) published on TheStreet.com this morning.

For all of those following along at home, there was another bullish stochastic crossover on the S&P 500 daily chart in Friday’s session. Several upper candle closes above the 1875 level and a base could be in place for more than a short term move. 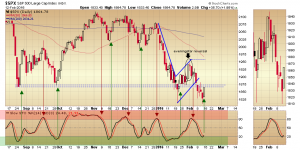 Here’s a link to my article on Costco (COST) published on TheStreet.com.

Here’s a link to my analysis of the Bristol Myers Squibb ($BMY) chart published on TheStreet.com yesterday.

The support line of the large horizontal channel on the S&P 500 weekly chart is being tested again and its ability to defend against the increasing downward pressures of the market is in question. Last week’s close was directly on the support line and the bearish candle that formed engulfed the real body range of the previous two candles. The relative strength index is tracking lower and below its centerline and the money flow index, a volume-weighted relative strength measure, is doing the same. These readings reflect the negative momentum in both price and money flow. 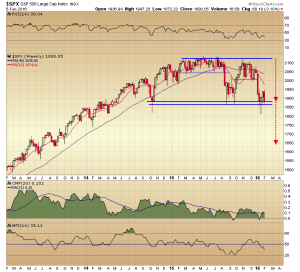 It may be that support will hold, as in did in August and September of last year and the index will bounce, establishing another data point in the continuing evolution of the channel and setting-up the potential for a retest of channel resistance. Confirmation of this scenario first requires at a minimum, an upper candle close above the 1950 level. A breakdown from the channel projects a similar percentage move as a bounce, measured by the depth of the channel but, of course, lower and projecting a target in the 1650 area.

The daily chart should be familiar to regular readers, I have been highlighting the rollovers on the stochastic oscillator for several months and they have provided good short-term trading signals. Stochastics another bearish crossover on Wednesday and, in addition, an eveningstar pattern formed on the chart. An eveningstar is a three-day bearish reversal pattern, which consists of a large white candle, followed by a narrow opening and closing range “doji” candle, and completed by a large dark candle. It represents transition from bullishness to bearishness.

The sharp decline in the index in the first half of January and then the reflexive bounce in the last half of the month, is taking on the appearance of a large bearish flag pattern. The top end of the flag was tested and failed at the beginning of the week forming a morningstar candle pattern, which is a three-period reversal candle that reflects transition form bullishness to bearishness. 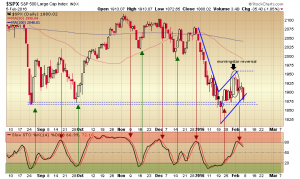 In addition, the stochastic oscillator sent another sell signal, making a bearish crossover in its overbought zone then moving down and out of that zone. These overbought and oversold indications have been reliable short-term trading signals in the past. On Thursday a shooting star candle formed on the chart. This candle has a long upper wick and lower tail with a narrow opening and closing range real body, and reflects indecision.

(Friday Update: Market saw follow-through weakness in today’s session, and closed below rising channel support and just above the lateral support zone in the 1875 to 1865 area. More details and an analysis on multiple timeframes this weekend.)

Here’s a link to yesterday’s article on Comcast published on TheStreet.com.