One week ago we said despite the three week rise in the indices, the weekly charts looked just plain bullish — another week is in the trading books with further gains. That’s four straight weeks of bounce off the January mornigstar pattern highlighted back on February 19th. 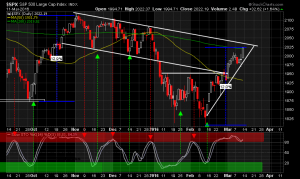 The S&P 500 has broken through its 50 day moving average and settled just above its 200 day average, and the next level of resistance is the downtrend line extended off the late 2015 highs and this year’s January high. We have been monitoring stochastic oscillator reversal signals for the last five months and they have been reliable. When the oscillator makes a bullish crossover in and oversold condition and then moves up and out of that oversold zone, it is a bullish signal, and the reverse is true for the bearish signal. The oscillator did make a bearish crossover last week and it looked like it was moving down and out of its overbought zone early this week, but it managed to remain “in the zone” and, in fact make another bullish crossover.
The S&P 500 bounced about 13% off its 2015 October low, and it has now bounced about 12% off its February low. At this point in time and price, and with the stochastic indicator clearly conflicted, a pullback seems like a likely scenario. But, that will require a confirming stochastic signal, it has been trustworthy up to now. Of course, a news event next week, a particular algorithm, more ECB commentary, the direction of crude prices, or any exogenous event could inject high levels of volatility that could send a false preliminary signal. That’s just the trading world we live in now.