I have been highlighting the stochastic oscillator on the S&P 500 index for the last six months, and it has been accurately signaling short term market reversals. A bullish signal occurs when the oscillator makes a positive crossover in an oversold condition and then moves up and out of the oversold zone; a bearish signal occurs when the oscillator makes a negative crossover in an overbought condition and then moves down and below the overbought zone. There have been ten signals since October 2015, five bullish and five bearish. The most recent, a bearish signal came yesterday as the oscillator moved out of an overbought condition for the first time in five weeks. 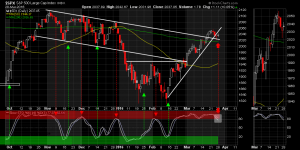