The S&P 500 index, as everyone knows, has been trading in a wide channel consolidation for the last year. During this time the relative strength index and Chaikin money flow have been tracking lower, below their declining 21 period averages. A narrow opening and closing range high wick “doji” candle formed this month, which represents an inability to hold into the upper end of the channel. 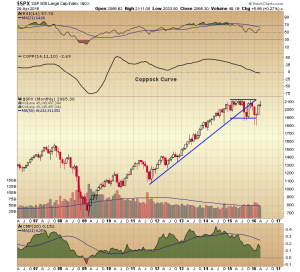 Additionally, the Coppock Curve indicator crossed below its center line for the first time since early 2008. This esoteric indicator is described in the “Chart School” section of Stockcharts.com:

The Coppock Curve is a momentum indicator developed by Edwin “Sedge” Coppock, who was an economist by training. Coppock introduced the indicator in Barron’s in October 1965. The goal of this indicator is to identify long-term buying opportunities in the S&P 500 and Dow Industrials. The signal is very simple. Coppock used monthly data to identify buying opportunities when the indicator moved from negative territory to positive territory. Although Coppock did not use it for sell signals, many technical analysts consider a cross from positive to negative territory as a sell signal.

The talk on CNBC is that the proximate cause of today’s intra-day reversal was the result of comments made by Carl Icahn this afternoon on their network.

Let’s go to the charts….

Ok, no argument from me. Tomorrow may be a good time for some positive push-back by a Federal Reserve Governor.

A link to my analysis of the Apple (AAPL) and Facebook (FB) charts published on TheStreet.com this morning.

Tom McClellan warns the surge in the iPath S&P 500 VIX ST Futures ETN (VXX) is a “double-contrary” indication in an article published on Zero Hedge. 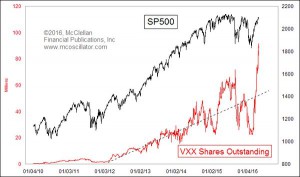 The weekly chart of Apple (AAPL) shows the stock making a head and shoulders top last year and then trading back down to key Fibonacci levels, measured off the 2013 low and the 2015 high. 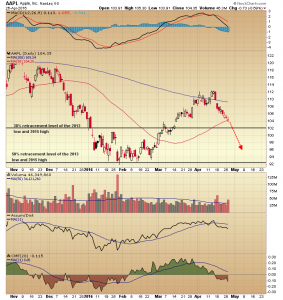 The decline in the stock price after hours today following a disappointing earnings report has taken it back below the 38% retracement level to the $96.00 area. The next level of technical support is the 50% retracement level at $92.50, but things may change as the conference call progresses.

Here’s a link to my article published on TheStreet.com this morning. 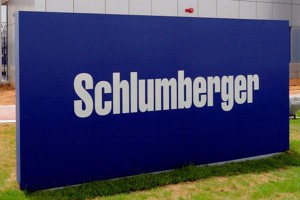 The good news is that the S&P 500 has moved off its February lows to return to a resistance area that marks historic highs and in yesterday’s session there was a “golden cross” on the daily chart, as the 50 day moving average moved above the 200 day average. The bad news is that the index has been having difficulty breaking to new highs for over a year now, and a series of bearish candles have formed as latest test of resistance is taking place. 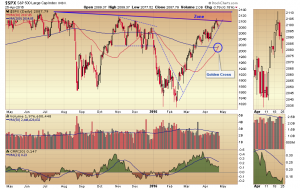 The suspect candles can be seen in the “thumbnail” on the right side of the chart. A large opening and closing range doji candle formed last Wednesday after two strong up days, and it was followed by Thursday’s large down candle. This three-day transitional series of candles is called an “eveningstar” pattern and is often seen at market highs. On Friday another large doji candle formed and in yesterday’s session a second consecutive candle formed with a narrow opening and closing range. If this last candle had formed after a downtrend or near a support level it would be considered a bullish hammer candle, but the fact that it formed near highs changes the interpretation of the intraday action. A hammer-like candle that forms near highs is called a “hanging man” candle and, while it looks identical to a bullish hammer candle, its connotation is negative and it is considered a potentially bearish reversal sign. Like all technical candles and patterns it requires confirmation and in this particular scenario, confirmation needs to be quick and decisive. The resistance zone has to be penetrated soon, before the upward inertia of this rally off the February lows is lost. A loss of confidence in this latest run at new highs could lead to profit taking that morphs into panic selling.

Here’s a link to my analysis of the Cisco (CSCO) chart published on TheStreet.com this morning. 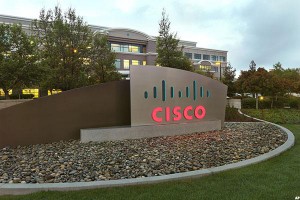 The Market Vectors Semiconductor (SMH) ETF has been trading in a narrow channel pattern for the last month, above support in the $53.75 area and after meeting resistance near the December 2015 highs in the $56.00 area. Last week it retested the channel low and the technical indicators suggest it is in danger of breaking down. 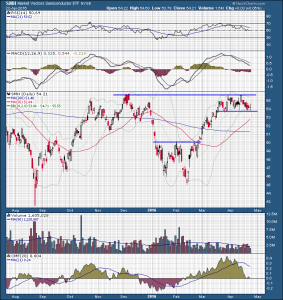 The RSI moved below its 21 period average this month and has continued to track lower, while the MacD made a bearish crossover about the same time and is trending in the same direction. Chaikin money flow has crossed below its signal line and is reflecting distribution during this consolidation phase. A lower candle close that takes out the channel bottom projects an initial target price back down near the flat 200 day moving average.

I was invited to join my friend Bob Lang on his Explosive Options webinar last week. It’s always a fun and informative experience, interacting with Bob and his audience and talking charts. Here is a link to his Options Insight Blog and make sure to sign on to Explosive.options.net on Thursday’s after the close for his expert review of the market environment and keen trading outlook. 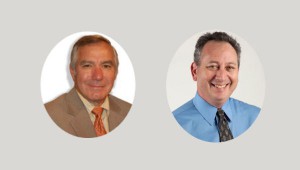