The consolidation continues on the S&P chart as the index seems to flirt with either breakout or breakdown on a daily basis. There hasn’t been a capitulation sell-off and the 50 day moving average is holding, that is encouraging news for the bulls. But the momentum indicators are rolling over and the longer it takes for another concerted effort at penetrating the resistance zone, the more the bears are emboldened. A spinning top candle formed in yesterday’s session. This candle has a narrow opening and closing range, situated in the middle of its overall range, and it reflects what else, indecision. 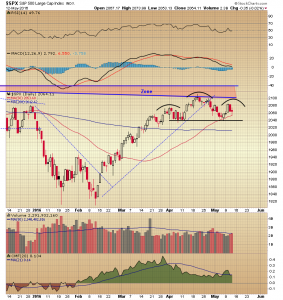 At some point there will be resolution and if it is to the downside, the action on the index over the last month will likely be referred to as a head and shoulders top. The March high would be the left shoulder, the April “doji” high that touched the resistance zone would be the head, and the right shoulder is currently under construction. The potential pattern noted, remain patient and require confirmation.

One thought on “S&P Head and Shoulders Top”