The dashed line on the weekly S&P 500 index is a linear regression line or the best-fit straight line of the price of the index over the charted period. Slope measures the rise-over-run of a linear regression line. Rise-over-run is a calculation based on time and price and generally an advancing period has a positive slope and a declining period has a negative slope. The slope indicator is a lagging momentum indicator.

In 2009, the 52 week slope indicator crossed above its centerline acknowledging that an advance was underway. In 2011, it sent a false signal after the sharp July/ August decline, due to its inherent lag but caught up with the index in 2012, and crossed back above its centerline. It remained above it for the next three years and then in October last year, as the turbulence in the market began, the slope reading again dropped below zero and remains below that level. The graph below the slope indicator is the 50 day moving average of the 52 week slope indicator and it smooths out the false 2011 reading. Of course, only two data points doesn’t make a statistically reliable model, but if the chart is expanded there are additional crossovers that, while they lag have then aligned with the longer term trends in the index. 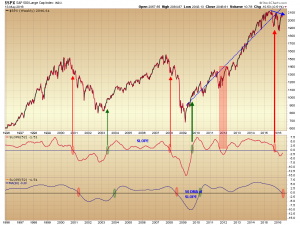 On the daily chart the neckline of a head and shoulders top highlighted here is now being tested after Friday’s technically damaging session. The implications of a neckline break within the context of the longer term slope indication is decidedly bearish for the index and the broader market. 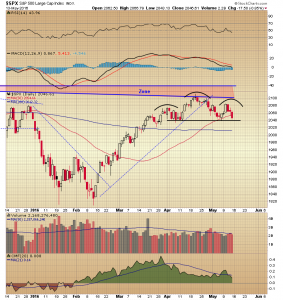