Tesla (TSLA) has been attempting to hold above the intersection of the 50% Fibonacci retracement level of its 2016 range and the downtrend line drawn off its 2015 highs. Resistance is being supplied by the 38% retracement level and the converging 50 day moving average. Shares attempted to breakout in today’s session but were soundly rebuffed, closing at the lower end of their daily range. The well-defined boundaries of the zone suggest that a confirmed breakout or a breakdown will determine the intermediate term direction of the stock price. 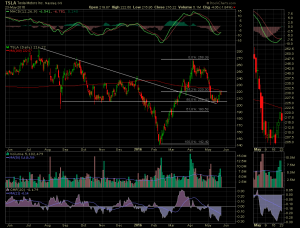