The market traded in a narrow range all day continuing a pattern that began in the last half of Friday’s session. The thirty minute chart shows the contracting ribbon of Bollinger bands and the Bollinger bandwidth indicator at the bottom of the chart, which is at a level not seen since late April and which was followed by a volatile two days. 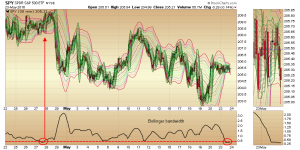 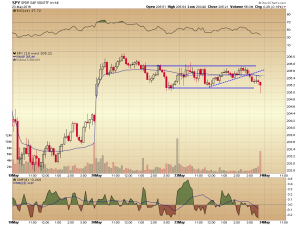 The ten minute chart highlights the channel pattern the SPY has been moving in and a break above or below the boundaries could be followed by another several days of volatile action.