The money center banks broke down sharply at the beginning of year but were able to bounce back up to retest their former support-turned-resistance levels. Those retests failed after the dovish FOMC statement was released and the initial pullback accelerated after the Brexit vote dashed all hopes of a near term interest rate hike. 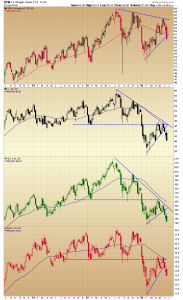 Under improving economic circumstances it would be a difficult task to repair the damage on these charts. The current scenario as framed by the Federal Reserve statement and the issues in Japan and Europe suggests it will take time and perhaps much lower prices before there is stabilization in the banking sector.