Light Crude Oil ($WTIC) retreated from the $50.00 level last month and has now moved back down to retest its 200 day moving average. The average has supplied important resistance and support (mostly resistance) for the last two years, and remains a key technical level.

If it could hold here and eventually bounce back up, the move would be interpreted as the right shoulder of an inverse head and shoulders pattern on the weekly chart, with the neckline at the $50.00 level. The formation of the pattern and a subsequent break above the neckline would imply a long term bottom was in place. That is a fair amount of speculation at this point in time and the short term reversal has to play out, before considering the long term scenario. 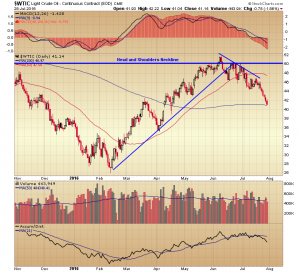 The daily chart shows an uptrend line that defines the rally move off the February lows and then the June bump up against the $50.00 level. What followed was a pullback that broke the trend line, then took out the 50 day moving average, finally cascading down to the 200 day average. The daily MacD is overlaid on a weekly histogram of the oscillator and is tracking below the center line on both timeframes, and accumulation/distribution is under its 21 period signal average. Crude oil is at a key level and if it were to hold here at $41.00, it could energize another move towards $50.00 and a potential base breakout.

One thought on “The Crude Oil Picture on Multiple Timeframes”