The S&P 500 chart looks like a rocket escaping the earth’s atmosphere. The V-shaped Brexit bottom that briefly penetrated channel support has accelerated up through the confines of upper channel resistance and continued higher. The classic technical take on a market move like this is that gains will have to be consolidated, and at some point that might come with a retest of channel resistance-turned-support. 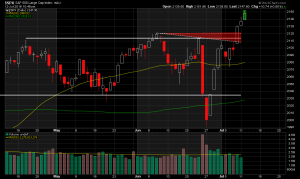 Linkage to my article on three cyber-security trades published on TheStreet.com this morning.

The bounce in the S&P 500 off its June lows has been impressive, with six of the eight sessions finishing higher and a 6.4% gain in the index. All the major indices have ignored what looked like opportunities to breakdown these past two weeks and prevailed in the face of recent technical and fundamental obstacles. 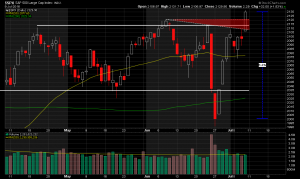 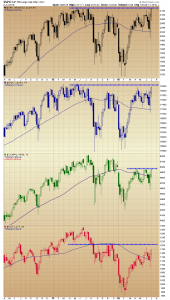 The S&P powered through a zone of resistance I have been illustrating on the daily chart and returned to an all-time high level along with the Dow, while the NASDAQ is testing its 2016 highs just under 5000, and the Russell 2000 is just under its important November 2015 highs near the 1200 level.
It is hard to ignore this degree of positive momentum as well as the magnetic properties of new highs and round numbers.

A chart check of Bemis (BMS), Packaging Corp. of America (PKG), and Graphic Packaging (GPK) posted on TheStreet.com this morning. 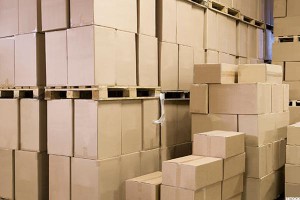 Shares of Boeing (BA) have been consolidating in horizontal channel pattern for several months and it looks like they are scheduled for another retest of support. Here’s my take on the chart published on TheStreet.com this morning.

The Russell 2000 index has under-performed the S&P 500 by 8% over the last 52 weeks, and the case could be made that small caps as usual growth leaders are now a drag on the broader market. The iShares Russell 2000 ETF (IWM) has made a series of three lower highs over the last month, above horizontal support in the $107.50 area. At the close on Tuesday a bearish eveningstar pattern formed on the IWM daily chart. 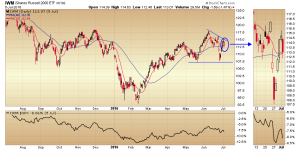 This three-day pattern consists of a large white candle, followed by a small opening and closing range doji candle, and completed by a large dark candle. It reflects a transition from bullishness to bearishness and is often seen at market tops. It formed just above the intersection of the 50 and 200 day moving averages, and that area is short term support on a closing basis, while resistance is located at the extension of the June downtrend line, currently in the $114.80 area.

A check of the Under Armour (UA) chart published on TheStreet.com this morning. 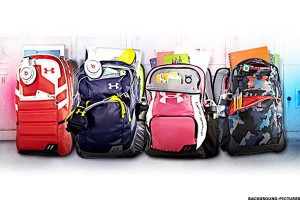 It has been a exceptional week for the market. On Monday the support line in the 2040 area of the fabled channel pattern on the S&P 500 chart was broken, and it looked like the consolidation had finally resolved – to the downside. On Tuesday there was a reactionary snap-back that retested the support-turned-resistance level. It was a strong one-day move but seemed logical following two extremely weak days. What happened next was not expected by many technicians or fundamental traders and that was two strong follow-up sessions which took the index back into channel range, and a Friday close back up near channel resistance. Monday’s break below channel support proved to be a “bear trap.” 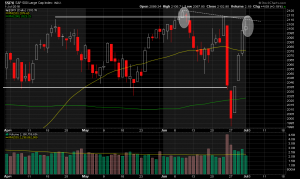 There was a “bull trap” earlier in the month after a “shooting star” candle formed on June-7 that penetrated channel resistance intraday and then closed back under it. These high wick shooting star candles are signs of exhaustion and while they can be followed by several attempts to continue to push prices higher, they often precede a period of pullback or consolidation. A shooting star formed in Friday’s session just below horizontal channel resistance and the downtrend line drawn off the false breakout high. It could be the first sign of a bearish transition and that may not be a bad thing over the intermediate term.
The reversal and run this week expended a lot of the market’s energy and, at this point, it might be in the best interest of the bulls if this latest shooting star candle did signal a brief pause or pullback, so the market can regroup and refresh before the next breakout attempt.

Here’s a link to my article on Salesforce.com (CRM) published onTheStreet.com this morning. 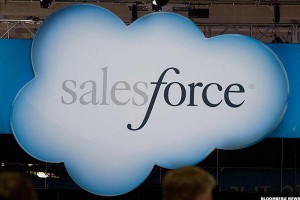