Here’s a link to yet another Bloomberg interview with the “Bond King.” It’s nothing knew, just another warning about an apocalyptic credit cycle implosion and the potentially irreversible damage being done to the US economy by current Federal Reserve policy. 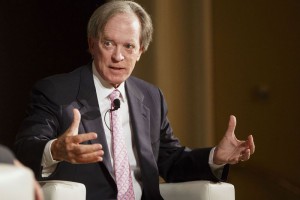 Here’s the link to my morning article on TheStreet which takes a look at a potential Alaska Air (ALK) trade. 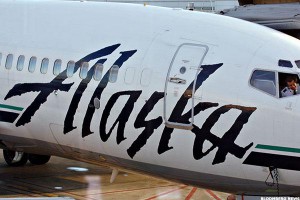 The S&P 500 index moved in a narrow and flat range in July and has been doing it again this month. This has compressed Bollinger bandwidth to a level not seen since September 2014, a month that experienced an extremely volatile and sharp move lower. A volatility squeeze can resolve in either direction but the technical indicators are suggesting there could be another move to the downside. 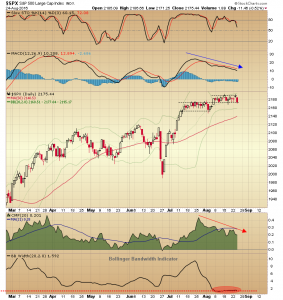 The MacD and the stochastic oscillator have been in bearish divergence to the flat index, along with the Chaikin money flow indicator. These readings reflect declining positive price and money flow momentum.
The general feel of the market on Wednesday was negative with a number of important issues looking fatigued, a pullback of some magnitude and duration seems in order.

The weekly chart of the Light Crude Oil — Continuous Contract ($WTIC) clearly illustrates the sharp decline in energy prices over the last two years after the support line of a long-term triangle pattern was breached in 2014. During the last 52 weeks, however, an inverse head-and-shoulders pattern has been forming below resistance at the $50 level, and a break and sustained move above this neckline resistance could see energy prices return back to the $75 area.

A move of that magnitude is not likely any time soon, however. That’s because while prices have advanced higher this month and are retesting the neckline, a candle reversal pattern has formed at this key resistance level on the daily chart. 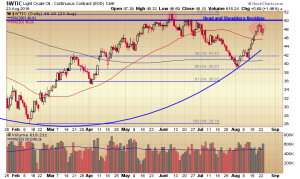 The last time the inverse head-and-shoulders neckline was tested was in June, and at that time a bearish reversal pattern formed on the daily chart. Now, as it is retested once again, another reversal pattern has formed that suggests another pullback.

In June the neckline was penetrated on a closing basis by a large white candle, but that was followed the next day by a large dark candle of equal range. This two-day reversal combination is called a tweezer pattern and it saw price recede back below the neckline and continue lower before finding support at the 50% Fibonacci retracement level of the 2016 range. The rally this month has taken the contract price back to the weekly neckline, where recent price action has formed an evening-star pattern.

The evening star is a three-day bearish reversal formation that consists of a large white candle, followed by a narrow opening and closing range “doji” candle, and completed by a large dark candle. It represents a transition from bullishness to bearishness, and is a reliable indication when it forms at key technical levels.

The evening star suggests a potential pullback in energy prices before any potential breakout, with the first level of support the 50-day moving average, followed by the 38% retracement level.

Linkage to my article on Wal-Mart (WMT) weakness published on TheStreet.com this morning. Watch the $72.00 level for an entry point.

Tesla (TSLA) shares can accelerate forward really quickly and then go into reverse equally as fast, just take a look at the ten minute chart. When Elon Musk tweeted out at 11:23 today that there would be a product announcement at 3:00, shares of the stock took off, but when the announcement came at around 3:30 informing the public that the Model “S” would be capable of going from 0-60 in 2.5 seconds, they rapidly reversed direction and sped lower. 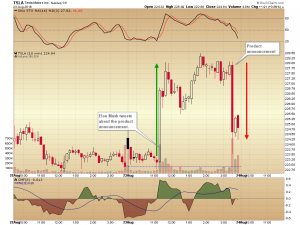 The iShares Emerging Markets (EEM) ETF has been pulling back off its recent highs over the last several sessions, but today formed an ominous bearish engulfing candle. Watch the uptrend line drawn off the lows of the last month, a break below it could see a pullback to the $35.00 area. 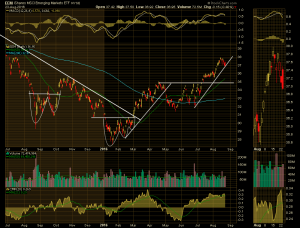 My friend, Bob Lang of ExplosiveOptions.net takes a look at the retail sector and highlights three stocks with strong charts on the “Off the Charts” segment of Mad Money.

The technical indicators on the S&P 500 chart are hinting at the potential for a soft pullback going into the end of this month. They are aligned much the same way they were at the beginning of April before the index reverted back to and under its 50-day moving average. It was a minor pullback then and, if it repeats, should be a minor event again, but retests of key moving-average support can also precede failures, so they should be watched carefully for potential breakdowns. 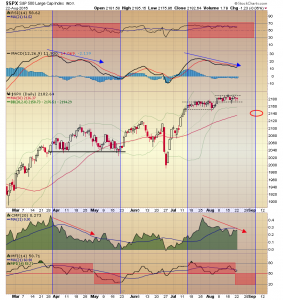 My article on BE Aerospace (BEAV) and Rockwell Collins (COL) published on TheStreet this morning. 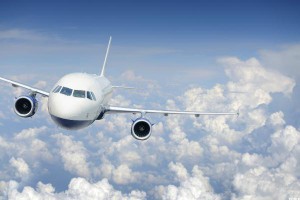