The percentage of stocks above their 50 day moving average dropped from over 61% on Thursday to 34% at the close in Friday’s session. This reflects the broad breadth of the decline on Friday, and clearly sentiment and the general tone of the market have shifted from a neutral to bearish position. 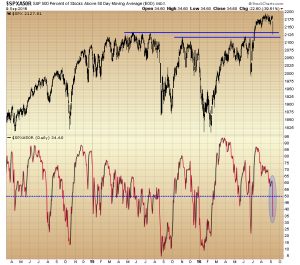 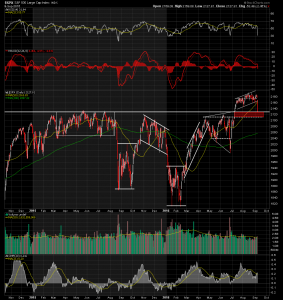 (More on the action in the broader market averages over the weekend.)

The S&P 500 index needs to make a new high and retest the upper end of the rising trading channel to maintain its upside momentum.

Here are three of my articles published this week on TheStreet:

Are You Ready to Sell Apple on Strength?

Hasbro and Mattel Are Poised to Break Out 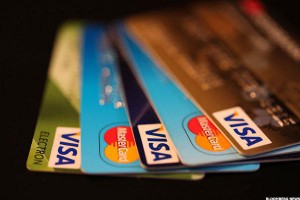 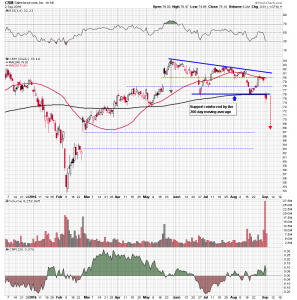 Shares gapped lower at the open on Thursday after the report on Wednesday, breaking through triangle support and the 200 day moving average, on heavy volume. The former support-turned-resistance was tested In Friday’s session and held. The triangle pattern projects a downside target near the upper end of the February gap in the $67.00 area.

In Thursday’s session the daily candles on major market index charts were decidedly indecisive. There was little change in the final day of trading this week on the Dow chart, where a doji candle formed, and on the S&P 500 and the NASDAQ Composite charts, with the formation of spinning top candles. Both these candles reinforce the neutral tone, but there was a positive shift in sentiment visible on the Russell 2000 chart. 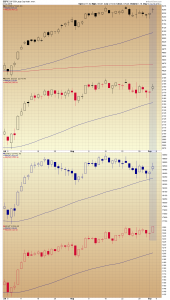 The white marubozu candle is characterized by an open at the low of the day and a close near the high, with a wide overall range. It suggests the buyers are in control and, in the case of the Russell chart, is considered a bullish continuation candle.
In the past, the Russell has shown leadership ability to the upside and downside, and this positive divergence of the small caps from the other broader averages, may be an initial indication of an eventual shift from the current neutral position of the overall market to a positive one.

The major market indices pulled back sharply in the first hours of trading today, but between 11:00 and 12:00 they began consolidating in a horizontal channel that can be seen on the ten minute chart. They powered back higher in the next hour, consolidated again and finished the session back near their highs. 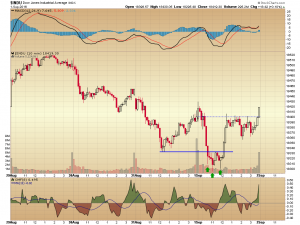 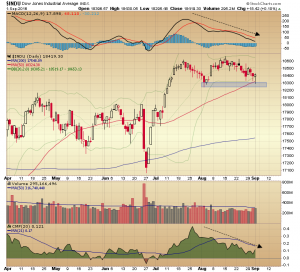 The early downdraft and the subsequent bounce formed what appears to be a hammer candle on the Dow daily chart above the low this month and the rising 50 day moving average. Similar hammers or narrow opening and closing range doji candles formed on the S&P 500, the NASDAQ Composite, and the Russell 2000 Index charts. 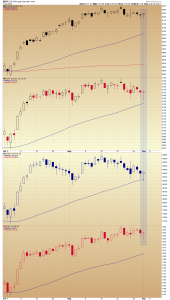 Follow-through action or lack of it will decide if these are hammer candles that will forge a bottom and propel the indices higher, or ominous hanging man candles. The hanging man is a candle very similar to the hammer, except its real body is positioned near the upper end of the overall range and they form near tops and signal downside reversals.

It’s early in the session but the $DJIA is retesting this month’s lows, and its 50 day moving average – a MacD divergence and the declining money flow is not encouraging going into the close. Multiple timeframe re-cap coming up tonight. 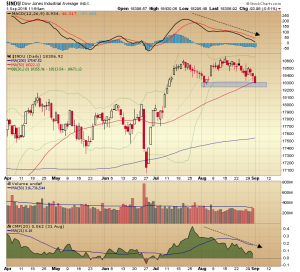