The S&P 500 index was down 0.12% for the month and a second small doji candle formed on the chart. A doji has a narrow opening and closing range and represents an indecisive struggle between buyers and sellers, and they are often seen at transition points in the market. Two consecutive dojis on a monthly chart is unusual and the continuing indecisiveness suggests a reversal in the current trend. 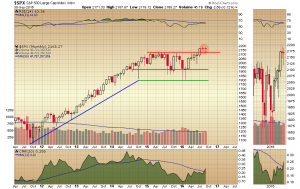 The 30 minute chart of the S&P includes a red regression line, which is the best-fit straight line of closing price over the period, and it is in bearish divergence to the flat line of the opening and closing prices, while the daily chart shows the index making higher lows over the last three weeks of the month, under the horizontal 50 day moving average.

September was an unusual month from a technical perspective, hard to interpret and harder to trade. At this point in time, the charts locate resistance in the 2190 to 2170 area, and two immediate levels of support, one between 2150 and 2140, and the second at the 2120 level. It is impossible to make anything more than an intraday commitment to direction until those levels are broken and the market either continues on or reverses trend. Be patient and preserve capital.