Discussing the VIX’s lowest level since August 5, 2015 and what it means for the options market with “Fast Money” trader Dan Nathan.

It’s only four data points but an interesting cycle of 21 week high periods has played out on the Volatility Index ($VIX) chart over the last 17 months. The pattern is highlighted with the blue cycle circles and I’ve placed Bollinger bands on the chart, that use a 21 period mean average with the bands set at three standard deviations. Each of the previous cycle highs touched the upper band, the most recent in early November this year.
The chart suggests calm in the first quarter of 2017 and then a sharp spike in volatility in early April, but, again, the data is limited and even if there was a larger set, I wouldn’t count on the cycle pattern playing out as predicted – because volatility is about unexpected change.

This year the price of spot copper finally broke through a five year downtrend line. The metal had been consolidating in a symmetrical triangle pattern since the end of last year, and then in late October this year it took out the triangle pattern downtrend line and made a perfect measured move up and through the long term downtrend line. I’ve been highlighting the action here as it played out, including the recent blow-off top, and now the fade that followed has returned price back to the retest the breakout level. How the action plays out in the new year is a guess, but it will take a lot of energy to just return it to a 38% retracement of the five year decline. 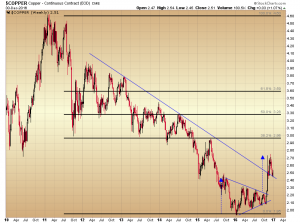 A shroud of bearish engulfing candles fell over the broad market in Wednesday’s session, dampening the holiday spirit and diming the hopes of Dow 20,000 by year’s end. The pattern was pervasive and affected the best performing stocks as well as some of the laggards. Here’s a look at the charts, as published on TheStreet.com this morning.

An inverse head and shoulders pattern formed on the weekly chart of the Light Crude Oil – continuous contract ($WTIC) over the last 18 months and I’ve highlighted its development over time. 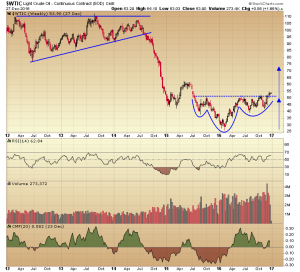 The commodity has now broken above the reversal pattern neckline and, after what appears to be a successful retest of that resistance-turned-support level, looks like it is ready to begin an extended move higher. 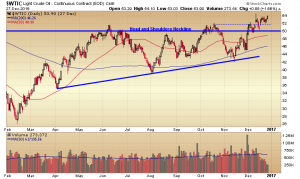 The stock market rally continues into the final week of trading this year, but the longer this advance off the November low continues, and the more overbought the major indices become, the more the opportunity for greater profits shifts to the short side. Check out my take on the charts of Ross Stores (ROST), Parametric Technology (PTC), and United Parcel Service (UPS) published this morning on TheStreet.com.

Post Holdings (POST) has been moving higher for the last two years, establishing a well-defined uptrend line on the daily chart. Last month that line was successfully retested. In the past, retests have been followed by a bounce and then a short period of consolidation, before the stock went on to make a higher high. I took a look at the chart and the technicals on TheStreet.com on Tuesday. 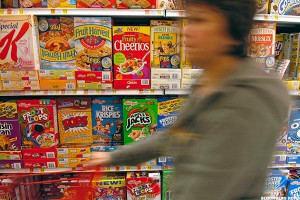 You might have one of these companies products in your home. Their stocks are basing and look ready to break to the upside. Check out my article published on TheStreet this morning. 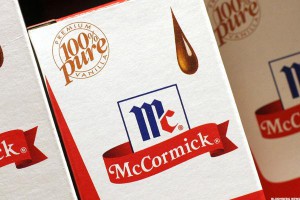 These four stocks have underperformed the broader market but now look poised to make up lost ground. Here’s a link to my article published on TheStreet this morning.

Tonight on Mad Money Jim Cramer went “Off the Charts” with the help of Tim Collins, a technician and colleague at RealMoney.com, to compare the high flying stocks of Broadcom Limited (AVGO) and Teck Resources (TECK).