Monthly Chart
A series of lower shadow or hammer-like candles formed on the monthly chart of the S&P 500 chart, which defined the bottom of an 18 month horizontal channel consolidation. The upper end of that pattern was broken in July of 2016 and the index has advanced off that level. In November a hammer formed that successfully retested the channel resistance-turned-support level and it was followed in December by a candle with a large wick or upper shadow that resembles a shooting star. Normally this would be a bearish indication and it may prove to be just that, but the pullback that formed the wick came in just the last three sessions of a very low volume holiday shortened week of trading. 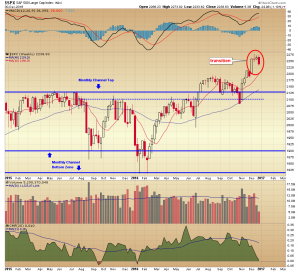 Weekly Chart
The bearish dark candle that formed in the final week of trading may be solely because of the over influence of light holiday volume, but there were earlier signs that upside momentum was fading on the weekly chart. The first candle in December was a large bullish white candle and it was followed by a narrow range doji, and then in the third week of that month, another small narrow opening and closing range candle. The implication being that there was a transition underway from bullishness to bearishness and the final candle of the month was confirmation. The pattern resembles an eveningstar bearish reversal formation, except with double dojis at the apex.

Daily Chart
The horizontal support lines were broken in the final session of the year on all the major market indices except the Russell 2000, which had previously been the weakest of the four. This is just another point of conflicting information. 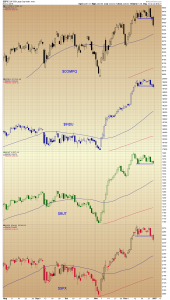 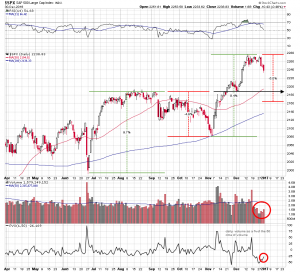 The action on the S&P 500 shows the index making a 9.7% move off its June low to its August high, followed by a 4.9% pullback to the 200 day moving average. The subsequent rally off the November low took out the August high and continued on to make another 9% advance before the final three day pullback. A second 5% decline would take out the 50 day moving average and the key 2190 level. That’s a purely speculative target and it is more likely that, if there is further downside, the August high would be significant support. If the holiday weakness is a low volume phenomenon then a reversal move should come quickly and should be sharp, the assumption being it would involve a new high.

It looks like patience is the play going into the new year.