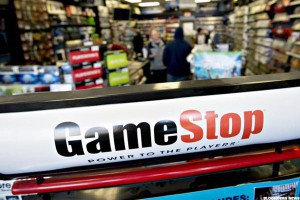 Shares of the video game and accessories retailer GameStop (GME) are forming a basing pattern just below their 200 day moving average. Bullish technical divergences suggest a breakout is imminent and the large outstanding short interest could spark a covering rally that has the potential to realize an 18% gain. 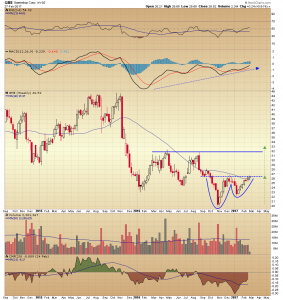 The weekly chart shows the stock attempting to recover from the sharp drop in late 2015, which saw it lose nearly half its value. A failed attempt to recover the 40 week moving average last year resulted in new lows, but the $20.00 level has held and the average is being retested. The price action over the last six months formed a cup and handle pattern with rim line resistance in the $26.50 area. Moving average convergence/divergence has been in bullish divergence to the declining stock price and the relative strength index is moving higher and above its centerline. These are indications of improving momentum and trend direction. Overall volume has been weak but Chaikin money flow crossed above its 21 period average and is tracking higher. 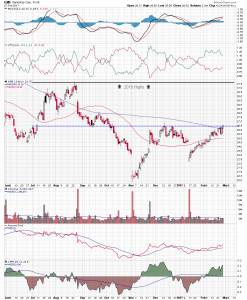 On the daily timeframe, the reversal pattern and the rim line retest can be seen in more detail. Earlier this month the stock moved over its 50 day moving average and continued back up to the current intersection of the 200 day average and pattern resistance. A bullish hammer candle formed in Monday’s session closing above the average and on the pattern rim line. Daily moving average convergence/divergence is above its center line and the vortex indicator, which is designed to identify early shifts in trend, made a bullish green-over-red red crossover last month. The accumulation/distribution line has crossed over its signal line and Chaikin money flow is above its center line, both suggesting the stock is experiencing renewed buying interest.

Gamestop is a long candidate after an upper candle close above cup and handle resistance using a trailing percentage stop. The pattern price objective is measured by adding the height of the cup to the rim line and targets an 18% gain in the area of the 2016 high.

The substantial downgrade of Tesla (TSLA) by Goldman Sachs (GS) this morning is in alignment with our technical take on the stock chart. Here is the most recent review of that analysis published on TheStreet.com.

Dunkin Brands (DNKN) has outperformed Starbucks (SBUX) by over 20% in the last 52 week period. That percent difference has moderated year-to-date but the more recent price action of the individual shares suggests that the divergence could return. 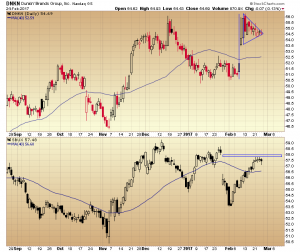 The daily chart of Dunkin shows the stock gapping higher earlier this month and then consolidating in a asymmetrical triangle pattern that together with the sharp jump formed a pennant or flag pattern. These patterns usually resolve higher and have a target price projection measured by adding the height of the flagpole to the breakout point. Starbucks, on the other hand, gapped lower at the end of January and is still attempting to close the upside gap. Last week three weak doji-like candles formed a potential Tri-Star pattern, and the stock looks more likely, at this point in time, to fail at this level or at least require more time to consolidate.

The hammer candle retest of the channel resistance-turned-support line on the Russell 2000 chart in Thursday’s session could be a key factor in determining the intermediate term direction of the small cap stocks, and potentially the broader market indices.

The small cap stocks have been underperforming the DJIA, the S&P 500, and the NASDAQ Composite year-to-date, and it is unlikely that relationship can continue without eventually being a drag on those indices. Small cap’s often lead the markets either higher or lower and a failure of the Russell to hold the 1390 level could be the straw that breaks the back of the broader and overextended market rally. On the other hand, a sharp bounce off the channel top and a catch-up move could help to sustain the current market momentum. The Russell 2000 is the index to watch over the next several sessions.

Check out the charts of Exxon Mobil (XOM), Van Eck Sectors Oil Services ETF (OIH), and the West Texas Intermediate Crude Continuous Contract (WTIC) for an overview of the broad energy sector, in my article on TheStreet.com this morning. 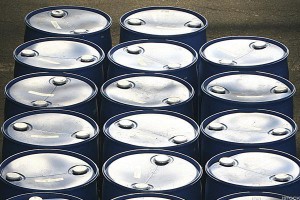 The SPDR S&P Biotech ETF (XBI) was trading in a four month symmetrical triangle before it broke out of pattern resistance this month. The fund rallied back up to its September high, but on Tuesday a bearish dark cloud cover candle formed over the previous session’s large bullish white candle. There was follow-through downside action in Wednesday’s session and the close, which was near the low of the day, penetrated a small uptrend line that defined the recent rise. The stochastic oscillator is moving down and out of an overbought condition and similar moves have marked previous highs during the consolidation period. Chaikin money flow suggests the biotech fund is being accumulated, but the money flow index, which is a volume-weighted momentum indicator, is in a severely overbought condition. It looks like some consolidation or regrouping will be required before a second attempt can be made at retaking last year’s high.

Shares of Exxon Mobil (XOM) have been declining steadily this year, and moved back down to long term support in the $81.00 area. This zone was support in September and November last year, and, on both occasions after it was tested the stock was able to rebound. Many of the same technical conditions are in place again and the Chaikin money flow indicator suggests that there has been renewed buying interest in the stock this month. But price action and the integrity of the $81.00 level will determine the intermediate term direction of the stock. 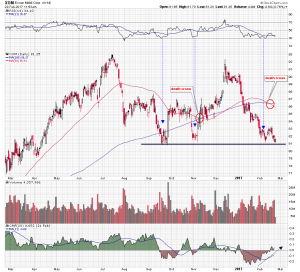 Nike (NKE) shares have been making a series of lower highs and lower lows since the end of 2015, and the price action has formed a large declining channel. The stock price has recently penetrated the downtrend line of the channel and the pattern price projection targets a potential move back up to the all-time highs. Here’s the full chart analysis published on TheStreet.com this morning.

The stock is breaking out of a channel within a channel, and each pattern projects a move higher. Here’s the story published this morning on TheStreet.com. 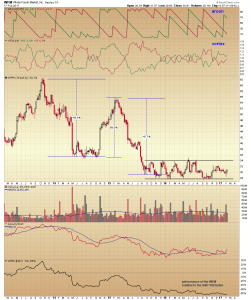 At 1:50 on Wednesday, the first of two high wick or long upper shadow candles formed on the ten minute SPDR S&P 500 (SPY) chart. It looked like a tradeable pullback was coming, similar to the one that followed the eveningstar reversal pattern that formed just after 11:00 and took price back to the VWAP, but instead there was a ramp up into the final hour of trading. 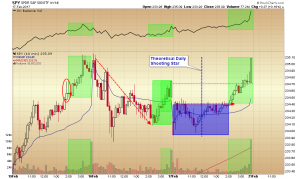 On Thursday the ETF was tracking lower going into the final two hours of the session and there was a rebound that saw the broader market rally into the close. Then, in the final session of the week, the 234.40 level acted a solid resistance for most of the day, until around 2:00 when the SPY broke above that level and rallied into the end of the trading week.
These small reversals in price had a larger effect on the appearance of the daily candles. In the case of Friday’s candle, instead of a large bullish white candle forming, a high wick or upper shadow shooting star candle would have formed suggesting an inability to hold all-time high levels — what would have been a clearly cautious candle.
Does this price action suggest machine manipulation or simply reflect the dynamics of a momentum driven market? I think the latter, but either way it is tough to trade.