The SPDR S&P Biotech ETF (XBI) was trading in a four month symmetrical triangle before it broke out of pattern resistance this month. The fund rallied back up to its September high, but on Tuesday a bearish dark cloud cover candle formed over the previous session’s large bullish white candle. There was follow-through downside action in Wednesday’s session and the close, which was near the low of the day, penetrated a small uptrend line that defined the recent rise. The stochastic oscillator is moving down and out of an overbought condition and similar moves have marked previous highs during the consolidation period. Chaikin money flow suggests the biotech fund is being accumulated, but the money flow index, which is a volume-weighted momentum indicator, is in a severely overbought condition. It looks like some consolidation or regrouping will be required before a second attempt can be made at retaking last year’s high. 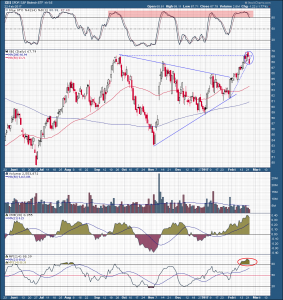