The follow-through price action in Thursday’s session has confirmed the Tesla TSLA blow-off top scenario outlined in my TheStreet.com article on Wednesday and produced another bearish candle pattern. An eveningstar-like reversal pattern has formed on the daily chart, one with two center doji stars, at long term resistance and at a cycle high point in time. There’s nearby gap support in the $267.00 to $263.00 area, but if this topping pattern plays out the way previous cycle highs have, the stock is headed much lower. 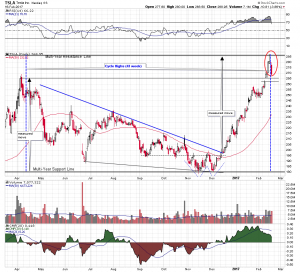 These four stocks have been trading over the intermediate term in well-defined consolidation patterns and are retesting resistance levels. Each stock closed at or near their highs in Tuesday’s session, and the technical indicators suggest they are prepared to break out and move higher. Here’s a link to the article published on TheStreet.com this morning. 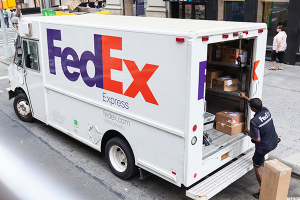 The action in time and price suggests Tesla (TSLA) has made an intermediate-term high. Here’s my take on the chart published this morning on TheStreet.com 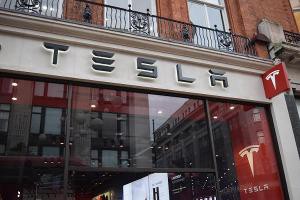 Shares of Alibaba Group Holdings (BABA) have not participated in the broader market’s four-day rally, and the divergent price action and the direction of money flow suggests further downside. There are two short-side strategies, let’s take a look at the setups, published on TheStreet.com this morning. 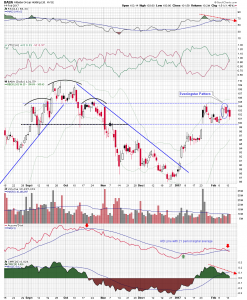 Monday’s close on the Russell 2000 marked a third consecutive higher close for the index. This hasn’t happened since it began forming a horizontal channel consolidation pattern in December last year.

The bad news is that a gravestone doji formed in the session, a candle with a narrow opening and closing range situated at the lower end of its overall range. A gravestone is often seen at failed new highs. Previous channel highs have been marked by similar bearish formations, like the early channel eveningstar pattern and a series of dark cloud cover candles, all of which prevented more than a two day advance.

The stock is showing signs of waning momentum and a potential technical breakdown. Here’s the trading setup as published this morning on TheStreet.com. 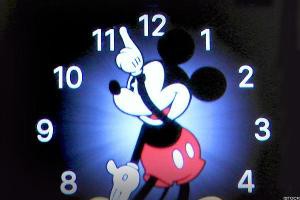 There is a resistance vacuum overhead and Waters (WAT) shares are ready to move higher. Here’s a look at the chart published on TheStreet.com this morning. 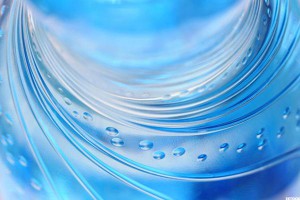 A potential breakout pattern and an overhead resistance vacuum, could initiate the second phase of a rally in the precious metal miners. Here’s my technical take published on TheStreet.com this morning. 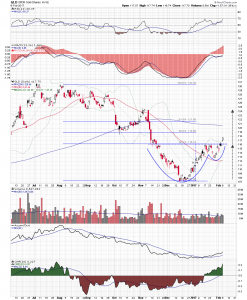 Linkage to my article on a potential rally in Starbucks (SBUX) and Dunkin’ Brands (DNKN) published this morning on TheStreet.com.

Netflix (NFLX) shares soared higher last October after the company reported earnings. They gapped up 18% initially and then continued to climb over the next three sessions before meeting resistance in the $128.75 area. 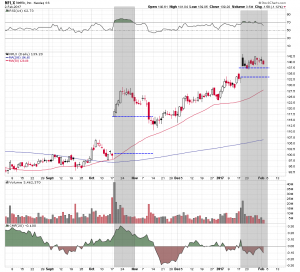 A series of high wick or upper shadows began to form on the daily chart, indicating an inability to hold the higher price level and the relative strength index moved into an oversold condition. The stock eventually broke below gap support continuing lower, but just shy of a 50 day moving average retest.
Last month’s positive earnings report saw another gap higher, and it has been followed by a second series of candles that, except for two, reflect instability and an inability to hold the recent highs. Additionally, the relative strength index is once again in an overbought condition, and this time the Chaikin money flow indicator is reflecting distribution into this last stalled earnings rally. A strong upper candle close above the $142.50 level could initiate the start of a second phase in the latest earnings advance, but a break below the $137.50 level could see the stock price close the most recent earnings gap, and potentially retest of the 50 day moving average.