The rising November rally trend lines on the Dow Jones Industrial average ($DJIA), the S&P 500 Index ($SPX), or the NASDAQ Composite Index charts have been broken with the indices closing near their lows of the Tuesday session, while the underperforming Russell 2000 Small-cap Index, retested the horizontal support line in place on its chart since the end of 2016. 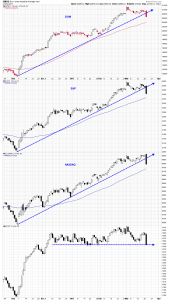 A pattern on the S&P 500 daily chart of successfully retesting important levels of resistance-turned-support and then moving higher has failed, along with the rising trend line drawn off the November 2016 and February 2017 lows. 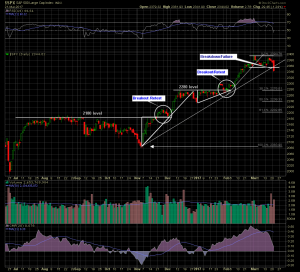 The nearly five month rally that had seen the S&P rally 15% may need a pause and a period of consolidation or pullback. How long the pause or deep the pullback remains to be seen, but with the Volatility Index $VIX nearing a potential cycle high period, there is the possibility of large moves on the stock index. 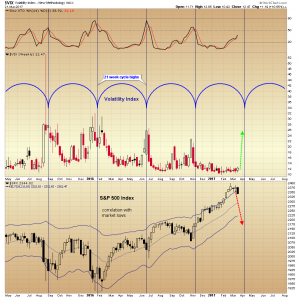 Interestingly, the indices gapped higher at the start of the session but then immediately reversed and the relentless selling began as evidenced in the price action and the volume.
Tuesday was a disconcerting day not because of the percentage decline but because of the lack of an initial catalyst, however read Jim Cramer’s take on the potential problem published on TheStreet.com this morning.