Shares of the fabless semiconductor designer, Silicon Motion Technology SIMO spent the last half of 2016 in a decline that saw them lose 30% of their value, but they spent most of this year forming a bottom. This month they have broken out of that base and have the potential to retrace over 50% of their previous loss. 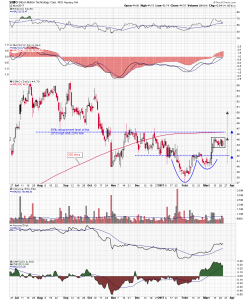 The consolidation this year took the form of a cup-and-handle pattern with rim line resistance in the $42.00 area. That resistance was broken this month and the stock jumped up to the $45.00 area, where it began trading in a small horizontal channel. The rim line breakout and the small channel that followed formed a flag pattern. A price objective for the cup-and-handle pattern is measured by taking the height of the cup and adding it to the rim line and it projects a target price in the $46.50 area. This would be a 50% retracement of the 2015 high and the 2016 low range and a retest of the 200-day moving average. The flag pattern objective is measured by taking the height of the flagpole and adding it to the top of the flag, and it projects to the $50.00 area.
Technical indications support a second pattern breakout and continuation of this month’s rally. Daily moving average convergence/divergence is overlaid on a weekly histogram of the oscillator and is above its center line on both time frames, and the relative strength index is tracking above its rising 21 period average. These readings reflect positive short term price and trend momentum. The accumulation/distribution line moved above its signal average early last month and Chaikin money flow followed shortly after, suggesting the stock has been under increasing levels of accumulation.
The stock is a long candidate after a break above the flag consolidation using a trailing percentage stop.

(This article was published this morning on TheStreet.com)