Endologix (ELGX) develops and markets medical devices for the treatment of abdominal aortic aneurysms, and its stock price has been consolidating in an extremely narrow range since the beginning of the year. The technical indicators suggest a breakout is imminent and with a 24% short interest, there could be a sustained and powerful move. 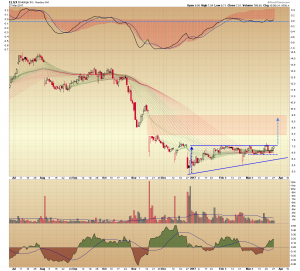 The daily chart is overlaid with a series of moving averages with the shorter periods in green and the longer in red. They form a ribbon that reflects price range and can be used to identify when the stock is trending or consolidating. The averages are very compressed, similar to the range seen in October last year just before the drop in the stock price, and have formed a narrow triangle pattern, under resistance in the $7.10 area. Daily moving average convergence divergence at the top of the chart, is overlaid on a weekly histogram of the oscillator. On the weekly timeframe, it made a bullish crossover in February and on the daily timeframe it is above its center line. These indications suggest improving short-term price and trend direction. Overall volume is weak and will have to improve to support a rally, but Chaikin money flow crossed above its 21-period signal average and is well into positive territory.

The stock is a long candidate after an upper candle close above triangle resistance, using a tight trailing stop. A confirmed triangle breakout projects a large percentage move back to the upper end of a wide gap in the $9.50 area.