The rally in McDonalds MCD has been interrupted by a month period of channel consolidation, and normally during a rally it is healthy for a stock to pause briefly and digest gains. In this case, however, the consolidation phase has been highlighted by a cluster of high wick candles, which may be signaling an end to, rather than a continuation of, the rally. 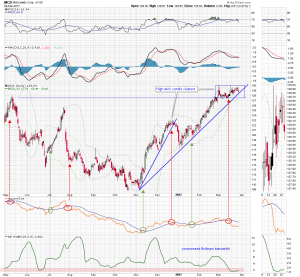 A grouping of high wick or upper shadow candles reflects multiple attempts to hold the upper range of the channel at the $130.00 level, and coming at new highs after an extended rally phase, this is a bearish signal. Wednesday’s session formed a shooting star or a candle with a large upper wick and small opening and closing range at the lower end of the candle. IT closed the session near the intersection of channel support and the long-term uptrend line. Moving average convergence/divergence has made a bearish crossover and is tracking lower in slight negative divergence to price, and the relative strength index has crossed out of its overbought zone and below its 21 period average. The recent consolidation has compressed Bollinger bandwidth to a level that, in the past, has been followed by volatile moves in the stock price. Accumulation/distribution has dropped under its signal average and these previous bullish and bearish money flow crossovers have been followed by higher and lower moves in the stock price. The combination of weak candle action and price momentum, as well as compressed bandwidth and negative money flow, is a formula for breakdown. McDonalds is a speculative short candidate after a lower candle close below $127.50 using a disciplined trailing buy-to-cover stop.