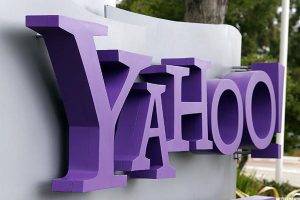 There are several bearish technical divergences on the Yahoo (YHOO) daily chart that suggest the stock may be preparing for a potentially sharp pullback. An uptrend line is being retested and a break below that support would be a good risk/reward short entry point.

The chart shows the stock price rising sharply in January and February this year but appearing to lose some momentum in March and forming a rounded top. A series of high wick candles have formed and the uptrend drawn off recent lows is being retested. Daily moving average convergence/divergence is overlaid on a weekly histogram of the oscillator, and has been moving lower on both timeframes in divergence to the stock price. The relative strength indicator has also been moving lower as shares have been moving higher, and transitioned below its 21 period moving average. A series of high wick candles formed over the last four trading sessions reflecting an inability of the stock to hold higher price levels. Over that same period Chaikin money flow dropped below its signal average and is moving into negative territory. The Bollinger bandwidth graph at the bottom of the chart measures standard deviation around the 20 period moving average, and the low reading reflects decreasing volatility. Periods of low volatility are often resolved by periods of increasing volatility. A combination of waning momentum and buying interest, plus the potential for volatile price action suggests a break of trend line support.
Yahoo is a speculative short candidate after penetration of the $46.00 level, using a position size that accommodates a stop above the $47.00 highs. The nearby 50 day moving average could supply some temporary support but after that there is little in the way of further technical support until the January upside gap area.