The strong opening in yesterday’s session took the board market averages up through their March down trend lines, and we noted the importance of holding above those levels into the close. That was not to be the case, and they began to reverse sharply after the Federal Reserve minutes were released around 2:00 PM, closing below their opening levels and forming bearish candles on their individual charts. 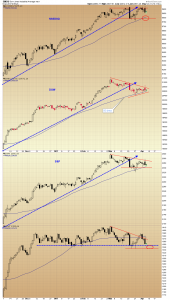 The emphasis is now shifting from resistance levels to support levels. On the NASDAQ, Dow Jones Industrial Average, and S&P 500 charts that support is currently being supplied by their 50 day moving averages, and on the Russell 2000 chart it is a horizontal level of well tested support in the 1350 area.
There will be resolution to the consolidation that has been going over the last month, and while it is hard to say in what direction the border market is eventually headed, when it does make its move, it will probably be swift.