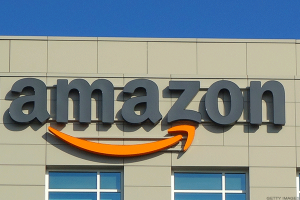 An eveningstar reversal pattern has formed on the Amazon AMZN daily chart near the upper end of a rising wedge consolidation. This pattern, if confirmed by follow-through price action, could be a signal that a top of some duration has been made, and the stock is preparing for a pullback. It is well known that calling tops is a fool’s game and calling a top in Amazon may be the most foolish game of all, but that does not mean technical signals should be ignored, and this pattern is a fairly reliable one. 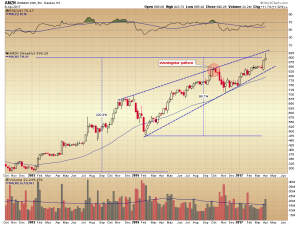 Let’s begin by taking a look of the weekly chart to put the daily price action in context. The stock began trading in the rising wedge pattern in early 2016 and since then it is up over 90%, and currently retesting the upper end of the pattern. This is a logical place to see a small retracement back to the rising support line, and the relative strength index by entering into an overbought condition, supports the possibility. The last time the indicator was at this level the stock was also testing the upper range of the wedge and subsequently a weekly eveningstar pattern formed, initiating a return to wedge support. This is the same pattern currently in place on the daily chart. 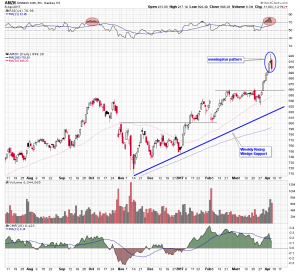 The eveningstar pattern is a reliable three-day reversal pattern that consists of a large white or bullish candle, followed by a narrow opening and closing range “doji” candle, and completed by a large dark or bearish candle. It reflects the transition in trader sentiment from bullishness, to a neutral stance, and finally to bearishness, and is often observed at important tops. Like all technical patterns it requires follow-through price confirmation, but if the stock price continues lower the next level of support is in the $860.00 area and after the weekly wedge support line. If wedge support were to be broken, and that is a 7% move lower and pure speculation at this point, it would constitute a break in the primary trend
This may be a shorting opportunity but that would be a highly speculative trade, it wouldn’t be foolhardy, however, if you are long Amazon to consider taking some profits.