Shares of Cisco Systems (CSCO) have pulled back off their March highs and are retesting their rising 50 day moving average. This moving average support looks unlikely to hold and sets up further downside in stock.

The weekly chart shows the stock moving up nearly 60% from its 2016 low to the high this year. The first half of that move took it back up to the 2015 highs and projected the second half move up to the $34.00 level. It also took the relative strength index into an overbought condition, but the indicator is now moving down and out of that zone, and while Chaikin money flow is still well into positive territory, overall volume in March was consistently under the 50 day moving average of volume. Previous pullbacks have returned to the rising 40 week (200 day) moving average, and while there is no guarantee there will be a retracement of that magnitude, it is important to note. 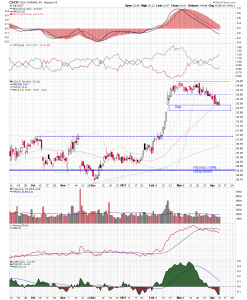 On the daily chart, the $33.50 level can be seen as support in March with penetration of that level taking the stock price back down to the 50 day moving average at the upper end of the February rising gap. Daily moving average convergence/divergence, which is overlaid on a weekly histogram of the oscillator, is moving lower on both timeframes, and the vortex indicator, designed to identify early shifts in trend, has made a bearish crossover. The month of March also saw the accumulation/distribution line cross below its signal average and Chaikin money flow drop sharply, and enter negative territory. The money flow and momentum indications suggest further downside and there is little in the way of identifiable support levels below the gap low, until the 2016 highs in the $31.25 level, and intersecting with that level, the 200 day moving average. CSCO is a good risk reward speculative short trade at its current level using an initial percentage buy-to-cover stop above the $33.50 level.