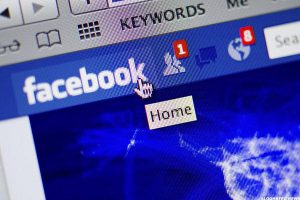 Facebook FB shares broke out of a triangle consolidation in January and rallied higher, posting a 24% gain in the first quarter of this year. Momentum has been fading over the last month of trading, however, and an uptrend line that has defined most of the rally was broken in Tuesday’s session. The stock looks like it is preparing to pull back and if that is the case, the question is how far? 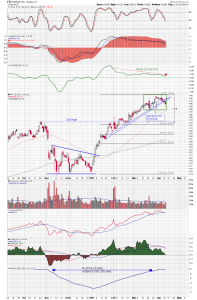 The green box on the daily chart highlights the last 20 trading days and the rising dotted trend line inside the box is a 20-period regression line. A regression line is the best-fit straight line of closing price over the period, and in this case the stock price is below the line. The slope indicator just above the price chart illustrates the rise-over-run of the 20-period linear regression, that is the movement over time around the regression line, and it has been in bearish divergence to price. The decline in momentum is being confirmed by the break below the center line on the stochastic oscillator, and the negative divergence on the daily moving average convergence/divergence indicator. On the money flow side, the Chaikin money flow indicator has been moving lower and is preparing to enter negative territory, and the 21-period moving average of the indicator is crossing below the 50 day moving average. The graphic at the bottom of the chart shows the percent difference between the 50-moving average relative to the 200-day moving average, a 10% upside divergence between the two averages, the highest it’s been since the October 2016 decline. Price momentum is fading, positive money flow is declining, and there is a major moving average diversion in place, the combination is a prescription for a pullback.

While these indications may seem insignificant for a stock that is in such a strong primary uptrend, with only the previous 2016 high level and very little other in the way of notable areas of chart support, a pullback could quickly accelerate. A move down to the area of the 2016 high and the 38% retracement level would constitute a 7% decline, with the next level of support the 50% retracement level and a 10% decline. A full reversion to the long-term uptrend line drawn off the lows of the rally that began in 2013 would constitute approximately a 15% decline, similar in magnitude to the October and November 2016 drop in the price of the stock.