(this article was first published on TheStreet.com on April 10th.)

Gold has rallied this year back up to the intersection of a key technical level and its 200-day moving average, and in the process, formed a bullish cup-and-handle pattern on its chart. If pattern resistance is broken, the upside target price projection takes it back to the 2016 highs in the 1375 area, a 10% gain in the price of the commodity from its current level. 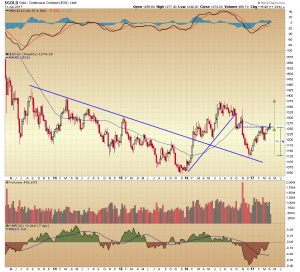 The weekly chart of the Gold Continuous Contract shows the rally in the first half of 2016 breaking above a trend line drawn off the declining 2014 and 2015 highs, and then making new multiyear highs, before reversing in the last half of the year and moving back down to retest the long-term downturn line. The bounce this year met resistance in the 1265 area and then pulled back off that level, before its current second attempt at a breakout. On this timeframe, the moving average convergence/divergence indicator has made a bullish crossover and is moving above its center line, and Chaikin money flow is attempting to enter positive territory. These are signs of intermediate term positive price and money flow momentum. 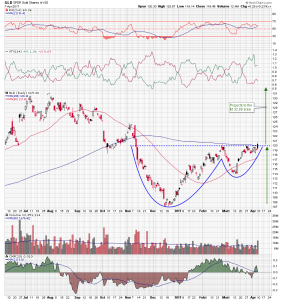 The daily chart of the popular SPDR Gold Shares ETF (GLD) highlights the cup-and-handle formation, with the long-term 2016 low marking the bottom of the cup proportion of the pattern, and the higher low last month the handle. Rim line resistance and the 200-day moving average are currently intersecting in the $120 area. The relative strength index moved above its center line and 21-period average, about the same time the vortex indicator, designed to identify early shifts in trend, made a bullish crossover. This month Chaikin money flow moved above its signal average and centerline, completing another coordinated movement of positive price momentum and money flow. The GLD is a long candidate after an upper candle close above the $120 level, using a trailing percentage stop, with the pattern price projection targeting the 2016 highs near the $132.00 level.