The broader market is experiencing a minor pullback this month, but this “minor” pullback has taken the indices and many of the most actively traded stocks back down to key support levels. This is the case with the Dow Jones Industrial Average, and additionally, a major technical reversal pattern has formed on its weekly chart, identical to one that has formed on the Apple (AAPL) chart. The implication is that even the mighty Apple may be ready to fall or, minus the embellished characterization, at least pull back. 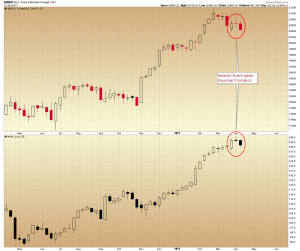 The eveningstar bearish reversal pattern that formed on the Dow and Apple weekly charts is a 3-period pattern consisting of a large white candle, followed by a narrow opening and closing range “doji” candle, and completed by a large dark candle. It represents a transition in trader sentiment from bullishness, to a neutral stance, to bearishness, and often forms at important tops. This pattern or a similar representation has appeared on a number of popular stocks, as well as major index charts. 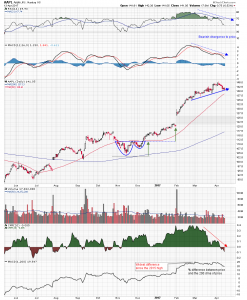 On the Apple daily chart, the stock price can be seen moving higher since the beginning of March, in bearish divergence to the relative strength indicator and the moving average convergence/divergence oscillator. Positive Chaikin money flow has dropped off dramatically in the last week and entered negative territory for the first time since the start of the November 2016 rally. These readings represent a coordination of bearish momentum and money flow indications. The stock price has moved above its 200-day moving average by the highest percentage difference since its 2015 high, and due for some measure of regression.
Apple shares returned to retest their two month uptrend line and enclosed on the low of the Friday session. Penetration of this trend line suggests the stock is headed lower, and the move may have the potential to close the February higher.

(This article was published on RealMoneyPro.com this morning.)