There has been a transition underway in the market over the last month, evident on multiple timeframes on the charts of the major market indices. One last level of technical support remains before the breakdown is confirmed and market heads lower. The weekly chart supplies context for the potential move and the daily charts provide the trigger. 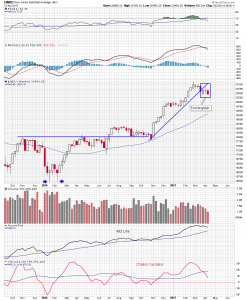 The weekly chart of the Dow Jones Industrial Average shows the index moving higher in 2016 in three distinct phases: the first, a rally off the double bottom low and then a test of 40 week moving average; the second phase, a higher high and a retest of the average; and third, the sharp increase in trajectory starting at the end of October that has taken it to the all-time 2017 high. Four weeks ago the uptrend line that delineated the final phase was broken, and over the last three weeks an eveningstar pattern has formed on the chart. The eveningstar pattern is a 3-period bearish reversal pattern consisting of a large white candle, followed by a narrow opening and closing range “doji” candle, and completed by a large dark candle. It represents a transition in trader sentiment from bullishness, to a neutral stance, to bearishness, and often forms at important tops. The relative strength index and moving average convergence/divergence indicator reflect the recent loss in momentum, but more important is the slowdown, again very recent, in positive money flow. Accumulation/distribution is still tracking above its 21 period average, but the Chaikin Oscillator has crossed below its signal average. The oscillator is a momentum indicator designed to anticipate directional changes in the A/D line. Momentum and money flow readings, as well as recent movement in the index suggest traders may be losing confidence in the ability of the market to sustain this phase of the rally. Let’s take a look at the daily chart to see how this transition is playing out on that timeframe. 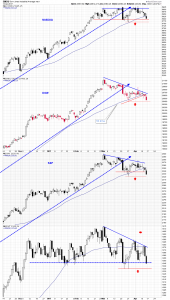 The daily chart includes the DJIA, along with the S&P 500 index, the NASDAQ Composite, and the Russell 2000 Small-Cap Index. It shows the long-term uptrend lines being broken and the indices making lower highs and penetrating their 50 day moving averages, then arriving at or near their March lows. This final level of support on the Russell 2000 has been time tested and looks solid, but the equivalent levels on the other index charts look less substantial. Watch for a breakdown from these daily support levels as confirmation of the reversal action on the weekly chart.