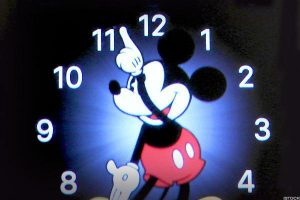 Shares of Disney (DIS) are reverting to their old ways by underperforming the Dow Jones Industrial Average in Monday’s session and also forming a bearish engulfing candle. The stock has outperformed the average by 3.8% year to date, but over the last year, it has underperformed by 3.5%, and while all the broader market averages were up more than 1% on Monday, it was down 0.65% on the day. Relative underperformance within the context of a sharp market rally and the formation of the engulfing candle is a very bearish combination, and strongly suggests the stock is headed lower. 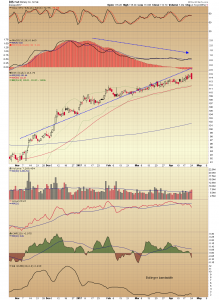 The daily chart shows the positive progression of higher highs and higher lows over the last six months, but then a decline in the angle of the trajectory over the last two months along with additional technical signs of trend weakness.
The dotted trend line that supported price from December through February is a linear regression line, which is the best-fit straight line of the 20-day average of the stock’s slope; in March, price began moving below that trend indicator.
Last month the accumulation/distribution line crossed below its signal average and Chaikin money flow moved down and into negative territory. These are signs of waning price and positive money flow momentum. The reading on the Bollinger bandwidth indicator reflects tight price range compression, a condition usually resolved by a volatile move, so a shift in the primary trend could be swift and sharp.
Disney is a good risk/reward short sale at its current price using an initial stop placed over the engulfing candle high. It is important to remember that all short positions are inherently speculative and require a disciplined trading plan.