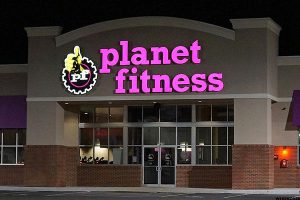 Planet Fitness PLNT, the discount gym operator, announced earlier this month that they had surpassed the 10 million member mark, and had plans to open 200 new locations this year. The immediate reaction of the stock price was to move lower but shortly after that it found a floor in the $18.25 area, has since begun to react positively to the news. In Wednesday’s session it broke through important resistance on strong volume, and with a 31% short interest in stock further upside could initiate a covering rally. 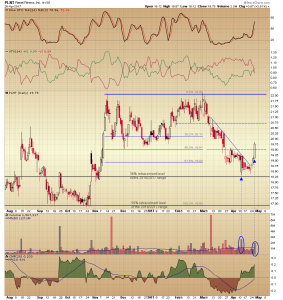 The daily chart shows the stock reaching all-time highs in November 2016 and then pulling back later that year, before making a second run at new highs early this year. That attempt failed and support in the $20.75 area was broken and the stock continued lower before finding support at the 38% Fibonacci retracement level of the 2016 and 2017 range. It was able to bounce off that second level of support and took out the previous downtrend line. In trading on Wednesday the stock was up 3.5% on strong volume, breaking above the 50% retracement level of the October 2016 and March 2017 range.
The stochastic oscillator had been moving in bullish divergence to the stock price and has now crossed above its center line reflecting the recent positive price momentum, and the vortex indicator, which is designed to identify early shifts in trend, is in the process of making a bullish green-over-ride crossover. On the money flows side, the successful test of the April low came on heavy volume, and Wednesday’s breakout saw similar volume, both days exceeding the 50 day moving average volume. Chaikin money flow has moved up sharply and is well into positive territory, suggesting the stock was being accumulated into its recent reversal.
PLNT is a buy at its current level using an initial stop under the $19.00 level.