Moving averages help to identify trends on different time frames, filter our short-term noise, and can act as support for resistance. They are a great technical tool. When two key moving averages come together the zone around them takes on increased technical significance. The intersection of the 50-day and 200-day moving averages is an example. The following three stocks have broken above this confluence of moving averages and are poised to rally off their reinforced support. 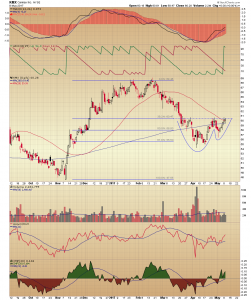 Carmax KMX is forming a cup and handle pattern on its daily chart with rim line resistance in the $60.50 area, just above the converging 50 and 200 day moving averages. Daily moving average convergence/divergence which is overlaid on a weekly histogram of the oscillator has made a bullish crossover and is trending higher on both timeframes, and the aroon indicator, designed to identify early shifts in trend, is making a bullish crossover. Chaikin money flow crossed into positive territory this month and the accumulation/distribution line moved above its signal average. The stock looks poised to break out and is a long candidate after an upper candle close above rim line resistance. 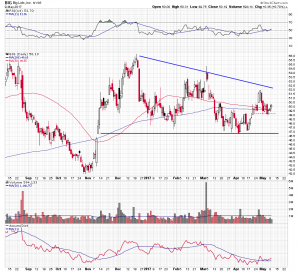 Shares of Big Lots BIG have making a series of lower highs above horizontal support in the $47.00, forming a wide range triangle pattern in the process, and price is positioned just above the converging 50 and 200 and moving averages. The relative strength index has been trending higher and is above its centerline and the accumulation/distribution line has moved above its signal average. These are complementary indications of positive price momentum and money flow. The stock is a buy at its current level using an initial stock under the $49.00 area. 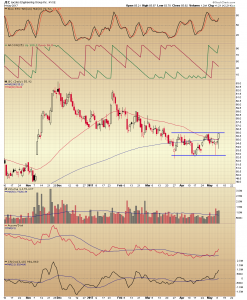 Shares of Jacobs Engineering Group JEC have been trading in a horizontal channel pattern for the last two months, and a large hammer candle formed in Tuesday’s session above the intersection of the 50 and 200 day moving averages. The close was near the high of the day and is retesting channel resistance. The stochastics oscillator and the aroon indicator have both made bullish crossovers reflecting the shift in price momentum and trend direction. The accumulation distribution line is above its signal average and the Chaikin oscillator, an average of the 3 and 10 period averages of Chaikin money flow, is above its center line. The stock is a buy after an upper candle close above pattern resistance using a trailing percentage stop.

This article appeared on TheStreet.com this morning.