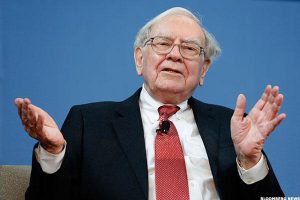 A set of technical patterns that have formed on the Berkshire Hathaway (B) chart could be signaling a major top is in place. On the weekly chart, the March high this year formed an eveningstar pattern similar to the one that marked the April 2016 top. An eveningstar is a three-period pattern consisting of a large white candle, followed by a narrow-range opening and closing doji candle, and completed by a large dark candle, and it represents a transition in investor sentiment from bullishness to bearishness. 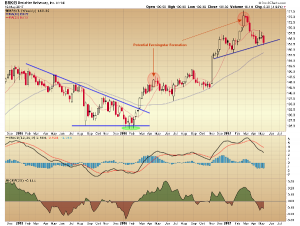 The eveningstar, also, delineated the head of a large head-and-shoulders consolidation above a rising neckline, which has been under construction since the beginning of the year. Moving average convergence/divergence has made a bearish crossover and is tracking lower, and Chaikin money flow moved into negative territory last month. The price action in last week’s trading formed another large dark candle that closed near its low and on the neckline. That support is under pressure and the price momentum and money flow indications suggest it is ready to give way.

At the top of the daily chart is a graph of the performance of the stock relative to that of the Dow Jones Industrial Average, and it has underperformed the index by 3% over the past year. The recent performance of Berkshire shares relative to the major market indices may be the reason why Warren Buffett is a fan of index funds. The head and shoulders can be seen in more detail on the daily timeframe, with the right shoulder forming over the past month just below the 50-day moving average and above the pattern neckline. The integrity of the neckline looks in jeopardy, and a confirmed breakdown projects a price objective measured by taking the height of pattern and subtracting it from the breakdown point. It targets the $145.00 area which would effectively wipe out the gain off the November 2016 rally.

(This article was published on TheStreet.com)