The markets were down sharply in Tuesday’s session and registered their largest single day decline since September, while the Volatility Index (VIX) spiked up over 46% and closed on the high of the session. The moves reminded us that investor sentiment is driven by more than fundamental analytics and technical indications. The dynamics behind it are primal and include fear and greed. As the markets move forward in whatever direction these visceral forces take them, here are several charts with support levels to monitor. 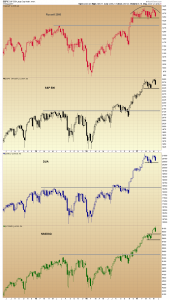 The one major market average to keep particular eye on is the Russell 2000 SmallCap Index (RUT), because it began to flatten out ahead of the other indices and has established a well-tested level of support in the 1345 area. A breach of this level would likely return the RUT to its 2016 high, an important technical and psychological level, and further pressure the border market averages. 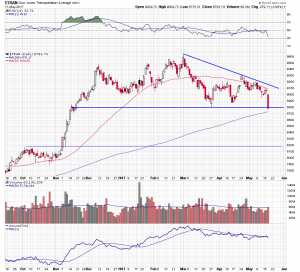 The Dow Jones Transportation Average has been trading in a triangle pattern for the last three months under a declining 50 day moving average. Today it made its lowest closing low since November 2016, and broke through the triangle support line, and there is little in the way of further technical support until the 8200 level. It is not likely the industrial sector will continue lower for bounce higher without participation from the transports. 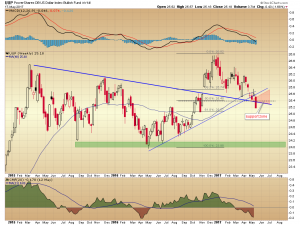 The PowerShares DB US Dollar Index Bullish Fund (UUP) has been making a series of lower highs and lower lows since the beginning of the year. Today’s nearly 1.7% decline saw it break through a reinforced zone of support and close on its low. Moving average convergence/divergence made a bearish cross over in January and Chaikin money flow moved into negative territory the following month. Fibonacci retracement levels drawn off the 2016 range have provided some support along the way, and hopefully the 62% level in the $25.07 area will help to stabilize the downward trajectory. 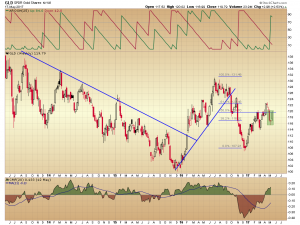 An eveningstar pattern formed on the weekly chart of the SPDR Gold Shares ETF (GLD), just below the 50% retracement level of its July 2016 high and the following December low. The eveningstar represents a transition in investor sentiment from bearishness to bullishness, but it must be remembered that, at this point in time, the bullish large white candle is not fully matured, and will not be until this Friday’s close. Chaikin money flow entered positive territory last month and the aroon indicator, which identifies early shifts in trend, has made a positive crossover. The ability of the fund to recapture the 50% interest level and base above it, could determine the intermediate term trend in gold.