Three names in the auto parts space have been undergoing price consolidation on their daily charts, after several months of declining price action, and technical indications now suggest they are preparing to break above pattern resistance. The moves are accompanied by improving volume and positive money flow which has the potential to reverse the previous downtrends and accelerate their price higher. 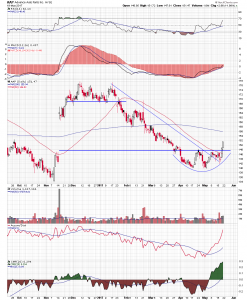 Shares of Advance Auto Parts (AAP) broke down through an intersection of support in the $169.00 area and its 50 day moving average earlier this year, and then began trending steadily lower. In April they began a basing process and have formed a rounded bottom on the daily chart. Last week an intersection of resistance at $148.00 level and the declining 50 day moving average was broken decisively to the upside. Daily moving average convergence/divergence is overlaid on a weekly histogram of the oscillator, and is moving above its center line on both timeframes, and the relative strength index is tracking higher above a rising 21 period moving average. Overall volume has picked up and Chaikin money flow suggests that the stock has been under accumulation during the second half of the consolidation. AAP is a long candidate at its current level using an initial percentage stop under the resistance-turned-support line. 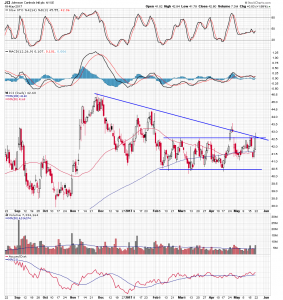 A lateral channel consolidation has been underway on the daily chart of Johnson Controls (JCI) over the last four months. The continued compression in the price has moderated the momentum indicators and, while overall volume has improved, the accumulation/distribution line has been oscillating around a flat signal average. This month the converging 50 and 200 day moving averages have supplied support in the upper half of the channel range, and in Friday’s session the stock was up nearly 2% and closed at channel resistance. It is a buy after an upper candle close that takes out the intersecting down trend line and horizontal resistance line, using a position size that accommodates an initial stop under the nexus of moving average support. 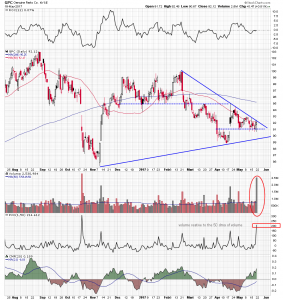 On the Genuine Parts (GPC) daily chart, the stock price can be seen consolidating over the last month in a small triangle pattern within a complex of larger consolidation patterns. A hammer candle formed in Friday’s session above support in the $91.00 area and below the intermediate term down trend line and the declining 50 day moving average. This retest of resistance was powered by a spike in volume 200% greater than the 50 day moving average of volume, equivalent to or greater than the volume that accompanied the October 2016 drop and the rally that followed in November that year. GPC is a long candidate after another candle close that takes out resistance using an initial percentage stop under the $91.00 support line.