Darling Ingredients (DAR) is a rendering company that sells natural feed and food ingredients, as well as organic fertilizers and biofuels. The stock has a history of making large percentage declines in relatively short periods of time. In 2008, it lost nearly 83% of the share value but recovered that and more over the next two years. Then in 2011, the stock price dropped 39%, and after another two year recovery, it fell over 66% from its 2013 high to its 2016 low. 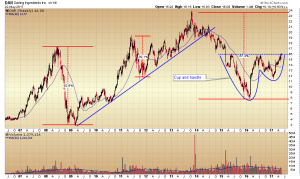 Since early last year, it has been able to retrace 50% the previous loss, in the process forming a large cup and handle pattern on the weekly chart and now looking like it is ready to break above rim line resistance, and make another attempt at a recovering the old highs. 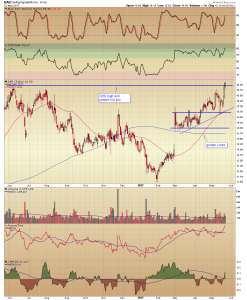 On the daily time frame, the stock can be seen bouncing off its February low this year which marked the handle low of the weekly pattern, and then gapping higher in March. It traded in a horizontal channel for the rest of the month, before breaking above pattern resistance in April and moving on this month to retest the weekly cup and handle rim line.

The stochastic oscillator reflects the positive momentum that followed the recent bounce off the 50 day moving average, and the Chandre Trend Meter reading, which identifies trend strength using multiple indicators on multiple timeframes, suggests the stock is a strong uptrend. Chaikin money flow has crossed above its signal average and into positive territory and supports recent price action and the potential for a breakout.

The stock is a long candidate after an upper candle close above the $16.00 rim line level using a trailing percentage stop. A break above this weekly cup and handle resistance line projects a pattern price objective that targets the former all-time 2013 highs, and would complete another process of deep pullback and recovery.