Shares of Alphabet (GOOGL) were up 5.8% last month and Amazon (AMZN) and Netflix (NFLX) were both up 5%, but Facebook (fb) was down in the May just over half a percent. While the price action of one stock cannot be extrapolated to include all members in a very strong sector, when the bearish divergence is in a stock like Facebook and the group is the FANG stocks, it warrants attention. In Wednesday’s session bearish candles formed on the daily charts of all the FANG stocks, each accompanied by strong downside volume.

A bearish engulfing candle which encompasses the overall range of the previous two trading sessions can be seen on the Facebook chart. The relative strength index moved out of an overbought condition earlier in the month and is below its 21 period moving average, and this week Chaikin money flow dropped below its signal line. Support is situated at the $148.00 level and the stock’s recent high is resistance. These are the levels to watch over the short term. 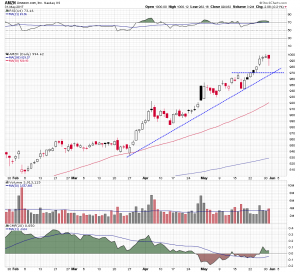 A hanging man candle and formed on the Amazon chart, which is identical to a hammer candle, with the real body or opening and closing range situated at the top end of its overall range and a long lower shadow or tail, the only difference being one forms at the end of the downtrend or on support and the other forms of the end of an uptrend or at resistance. Positive Chaikin money flow has been declining since April and the relative strength index is extremely overbought. If the stock were to pull back the intersection of trend lines in the $970.00 would be a logical level to retest. 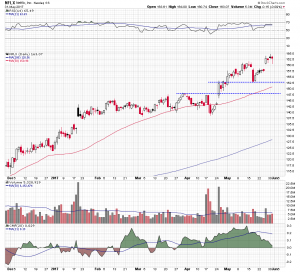 The hanging man candle also formed on the Netflix chart above the small upside gap. Chaikin money flow has been declining for the last two weeks and looks prepared to enter negative territory. The relative strength index moved out of an overbought condition earlier in the year and has remained above its center line since April. A pullback in Netflix could see the stock return the $152.50 area. 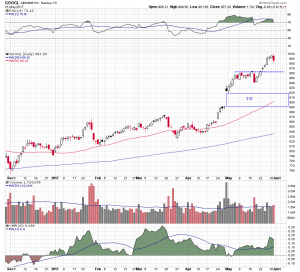 An engulfing candle formed on the Alphabet chart, again engulfing the two previous trading sessions. The stock moved back above its rising 50 day moving average in early April and then closed out that month with a strong upside gap. The relative strength index has remained in and overbought condition the most of this time and Chaikin money flow has been positive territory. An initial pullback should revisit the $963 area, but the large gap remains a vacuum to be filled.