Biotechnology stocks had an incredible run between 2012 and 2015, and the iShares Nasdaq Biotechnology ETF (IBB) was up 395% in that time. After making the record high, however, the space came under pressure and the fund dropped below its 40-week moving average, eventually retracing 50% of its historic rally before finding support in the $240.00 area. Since that time, it has been moving in a horizontal channel below the 38% retracement level of the pullback range in the $300.00 area, and 2016 triple-bottom support. 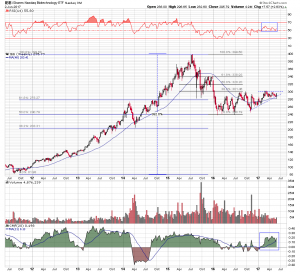 Early this year, shares recaptured their 40-week moving average and began trading in the upper half of the horizontal channel. Chaikin money flow moved over its signal average and into positive territory and the relative strength index crossed back above its center line. The recent range contraction has compressed Bollinger bandwidth to level not seen since 2012 and, as the chart shows, periods of very low volatility are often followed by volatile breakouts. 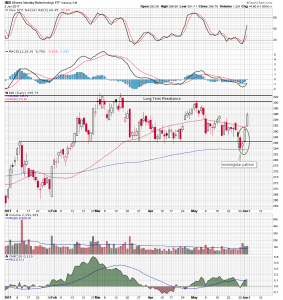 A bullish morningstar has formed on the daily chart just above the 200-day moving average. This three-period pattern consists of a large dark or down-day candle, followed by a narrow opening and closing range candle, and completed by large white or up-day candle. It is a reversal pattern that reflects a transition in trader sentiment from bearishness to bullishness. The fund price has re-entered upper-channel range and recaptured its 50-day moving average on strong volume and positive Chaikin money flow. Moving average convergence/divergence is making a bullish crossover, and the stochastic oscillator is crossed above its centerline, reflecting improving price momentum and renewed buying interest.

The IBB looks like it is preparing for another retest of the long-term resistance, and a breakout has the potential to initiate a volatile move and potentially return the sector to its long-term uptrend.