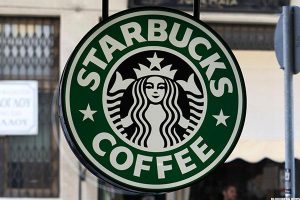 Shares of Starbucks (SBUX) began forming a rising triangle pattern in November last year, oscillating around their flat 200 day moving average, and making a series of lower highs and higher lows. Pattern resistance was broken in March this year and over the following three months the stock rallied to a perfect measured move in the $65.00 area. This pattern price objective is arrived at by taking the height of the triangle and adding it to the breakout level, and in this case, it represented a 12.5% gain. 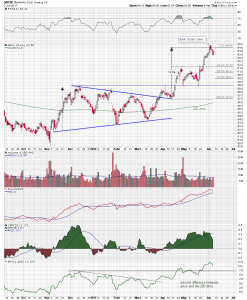 In Monday’s session the stock opened higher but immediately began pulling back, closing near its low and forming a dark cloud cover candle. A dark cloud candle is a bearish reversal sign but like all candles or patterns requires confirmation. That confirmation came in the form of Wednesday’s large dark candle, suggesting there is more downside to come. The first level of potential support is the April high in the $61.70 area, also the 38% retracement level of the breakout rally range.
There are two technical indications on the chart that provide additional confirmation and suggest the stock price may be overextended. It has diverged above its 200 day moving average by its widest percentage margin in over a year, and the relative strength index is moving out of an overbought zone. Chaikin money flow is still well into positive territory but has dropped sharply this week and is below its 21 period signal average.
Starbucks is a speculative short at its current level using a position signs that accommodates a buy-to-cover stop above its recent high. Short positions are by their nature speculative and require a disciplined trading strategy.