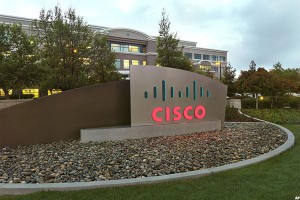 Cisco Systems (CSCO) is undergoing a process of consolidation on its daily chart that could result in a volatile move higher.

Shares have been trading in a narrow horizontal channel pattern, which has compressed the price range to a near-breaking point. Last month’s large gap lower created an upside resistance vacuum, and the momentum and money flow indicators suggest the stock is prepared to fill the void.

Here’s the current technical condition of Cisco and the breakout level that could trigger an initial 5.5% rally. 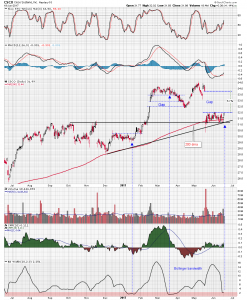 The daily chart shows Cisco shares bouncing off their 200-day moving average in December last year, and then going through a period of lateral consolidation. Bollinger bandwidth contracted to a very low level during this time, reflecting the lack of volatility. But, periods of low volatility are often resolved by periods of high volatility.

The subsequent break above channel resistance was followed by a sharp move higher, and in the process a small gap formed between the $33.00 and the $32.50 levels. A second period of consolidation began, again compressing Bollinger bandwidth, and this time the subsequent breakdown, took the price lower and closed the gap.

The stock has, once again, been trading in a tight horizontal channel, just above a long-term uptrend line, its 200-day moving average, and the 2016 high levels. Channel resistance is located in the $32.00 area, with little in a way of further resistance until a large downside gap that formed last month is filled just below multiple year highs. The stochastic oscillator is moving above its center line and the moving average convergence/divergence is making a bullish crossover. Chaikin money flow is in positive territory and the Bollinger bandwidth indicator is reflecting another level of tight compression, and the potential for a volatile move.

Cisco is a long candidate after a break above current channel resistance using an initial stop under the intersection of support in the $31.00 area.