Twitter shares were up over 5% in trading on Wednesday, retesting a downtrend line drawn off the 2013 and 2015 highs. This trend line has defined the long-term decline that began two months after the stock became publicly traded, and it is currently intersecting with an 18-month horizontal support line. The merging of these two trend lines could be a strong influence on the intermediate-term direction of the stock price. At this time, resolution looks like it will be to the upside, making Twitter a profitable buying opportunity.

The longer timeframe chart shows the decline that began in early 2014 that delineates the downtrend line, and the 18-month horizontal support line which could be acting as a base. In April, support was successfully tested and the subsequent bounce took the stock price back up to the downtrend line. It has made several attempts since that time to break through resistance. This current attempt is being supported by positive momentum indications and improving money flow readings. 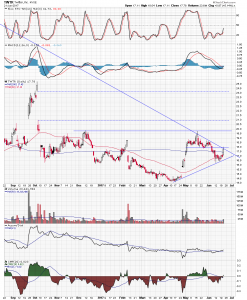 The stochastic oscillator is moving out of an oversold condition and made a positive crossover, and moving average convergence/divergence is in the process of making a bullish crossover. Chaikin money flow has moved above its center line and its base component accumulation/distribution is crossing above its signal average. The stock has a lot to prove, but having arrived at this nexus of support and resistance, it may be prepared to make a decision.

Twitter is a speculative long candidate after an upper-candle close above the $18.00 level, using a tight and disciplined trailing stop.